in Charity, Community, Featured, Not for Profit

Get a monthly round-up of our top blogs straight to your inbox.

What a way to kick off Dreamforce 2014! In a little over a year with Salesforce I have had the privilege of several experiences that have touched me both personally and professionally.

One of my early highlights was to hear our Chief Executive interview Sheryl Sandberg  - a particular heroine of mine - at Dreamforce last year. This week I was extremely fortunate to hear from another incredible female leader  - Hillary Rodham Clinton.

Right from the outset her words were so inspiring. Her own personal story is a great example in overcoming adversity, being true to your principles and working tirelessly to make the world a better place.

She began speaking where our own Marc Benioff usually starts - on Philanthropy. It made me so proud to hear her speak about the important way Salesforce as a company is “doing good while doing well”. I hope this message spurs on many more organisations to give back.

I strongly recommend watching the archive of her conversation with World Economic Forum founder Professor Klaus Schwab - introduced by Marc at the beginning as a major influence on his life. For me there were three key takeaways:

Talk-Read-Sing: She took time to talk about a program she is partnering with the Salesforce Foundation on - the http://www.talkreadsing.org/. As a mother myself it resonated when she spoke about what neurology has discovered about the impact on childrens’ synapses when parents talk, read or sing to them - as she did with her daughter Chelsea and I do with my children. This is an  experience she describes as “kind of delicious” as she repeats it with her new grandchild. (However, it was amusing that as early as 18 months Chelsea learned how to ask her mother to stop singing to her!) I think this is a reminder to us all of the importance of talking, reading and singing to our children and that we need to make the time for it.

Take Time For Face-to-Face: She spoke about the “perverse incentives” of modern life and how they conflict with what is often more important.  She noticed how the Senators she worked with in Washington were so busy fundraising that they didn’t have time to meet with and spend time with those people they were trying to do business with. Critical to this was her observation that: "Technology has put a higher premium on face-to-face meetings" and she emphasised how taking the time to travel to and meet with those stakeholders you must influence is so effective.

Less Talk, More Listen: But perhaps her most important lesson was that of the power of dialogue, remarking how far too often we chose not to listen to those with whom we disagree and how critical this is to work together. More than anything else I think this is a lesson I will take back with me and remember that while we all spend a lot of time focussed on what we should say, we don’t spend enough time listening :

This was also underlined by Klaus Schwab who said: “The world can only flourish and be more peaceful when there is dialogue.”

And finally I loved one of her closing comments about a subject particularly close to my heart. It will be a historic day when this happens, and will be the result of the efforts of such amazing women like Hillary. 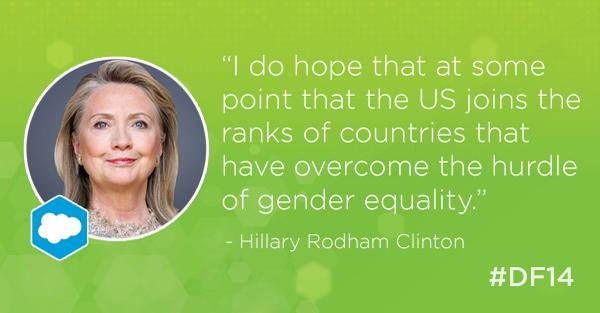 This is my second Dreamforce and it is always a mind-blowing experience. This year we are off to a powerful start. Later this week one of Hillary Clinton’s former colleagues Al Gore will join another heroine of mine - Arianna Huffington as well as music legend Neil Young and “The Power of Now” author Eckhart Tolle. If you can’t be here at Dreamforce, you can join us live online from 4am ADST or catch the archived version here.

Or, you can join us on our Essentials tour, where we will be bringing the best of Dreamforce to you

How customer service changed in 2020