Did You Forget Your Subscriber's Signup Anniversary? 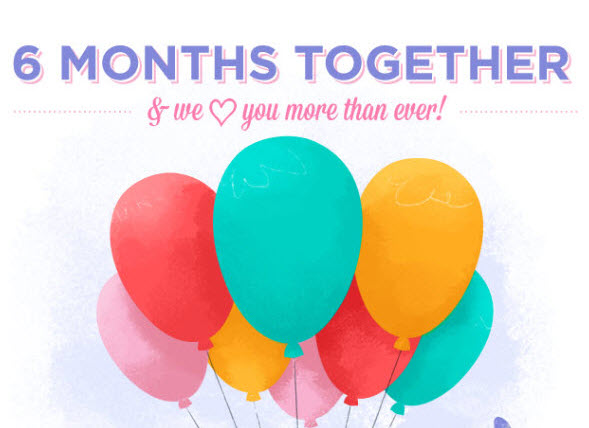 Like most triggered emails, anniversary emails also generate strong returns. It's kind of a broad category, since they can celebrate a wedding anniversary, the anniversary of a product purchase or a first purchase, or mark the number of years that a subscriber has been with you. All of them, though, are pegged to an individual subscriber and make them feel special.

Signup anniversary emails are similar to birthday emails, except you don't need to know subscribers' birth dates. Plus, you have more flexibility as to when to send them and you can have them escalate over the years, providing greater rewards to those who have stuck with you the longest.

For instance, ModCloth sends a 6-month anniversary email, not bothering to wait for the 1-year mark when perhaps the relationship might have cooled more. It has your standard reward messaging, but they also use the occasion to try to get more information from subscribers by asking for a social sign-in, promising to send a birthday email. That's smart to leverage the anniversary to deepen the relationship.

Levi's also sends an anniversary email, with messaging focused on spurring another purchase. ASOS, an Australian apparel retailer, uses their anniversary email to spur social interactions, asking subscribers to tweet a snapshot of themselves in their first ASOS purchase.

Zappos has created different emails depending on how many years a subscriber has been with them. For instance, their 3-year anniversary email features a quirky "hip-hop-opotamus" song and reminds the subscriber to take advantage of their VIP benefits. Theirs focused on brand voice and reminding subscribers of existing benefits rather than providing additional ones.

So if you already send a successful birthday email and would like to replicate those gains, or if want to launch a similar triggered email that doesn't require any outside information collection, consider launching a signup anniversary email. According to our State of Marketing survey, 75% of marketers that use them say that the returns are good to excellent.