Starbucks Brews Up a Cross-Channel Win 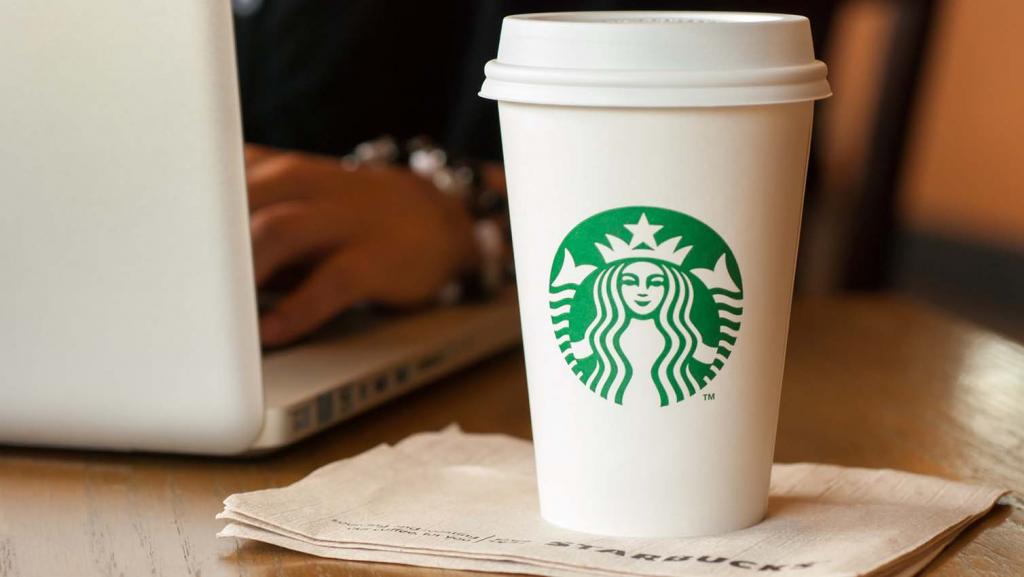 The ExactTarget Marketing Cloud was not involved in this campaign, but we're happy to bring you examples of great marketing-even when we aren't involved in the execution.

What a difference a few years (and a few new marketing channels) makes. Starbucks, in almost fairy tale fashion, bounced back from competitive and market challenges to reclaim their perky status. Plus, "Starbucks" has recently become synonymous with "awesome marketing." Not only is the beverage behemoth undeniably stronger, but their digital marketing efforts provide one of the best examples of how to leverage a cross-channel approach.

A great example is their Frappuccino Happy Hour promotion from May 1 through 10. A short-lived event lasting just ten days, Starbucks has tapped almost every available channel to help promote a fun, consistent message and a cohesive experience.

And believe me when I say thisâ¦they nailed it.

Let's take a look at a sampling of this campaign:

Some brands may think that a ten-day campaign doesn't warrant the resources to undertake these channels-and in truth, it all depends on the organization's priorities. Fortunately Starbucks did, and these two updates introduced common imagery (take note of the multi-color diamond animation) that would serve as a motif throughout the other channels.

This was actually the first interaction that pushed me down the rabbit hole of the Frappuccino marketing machine. I received the below message in my in-app mailbox: 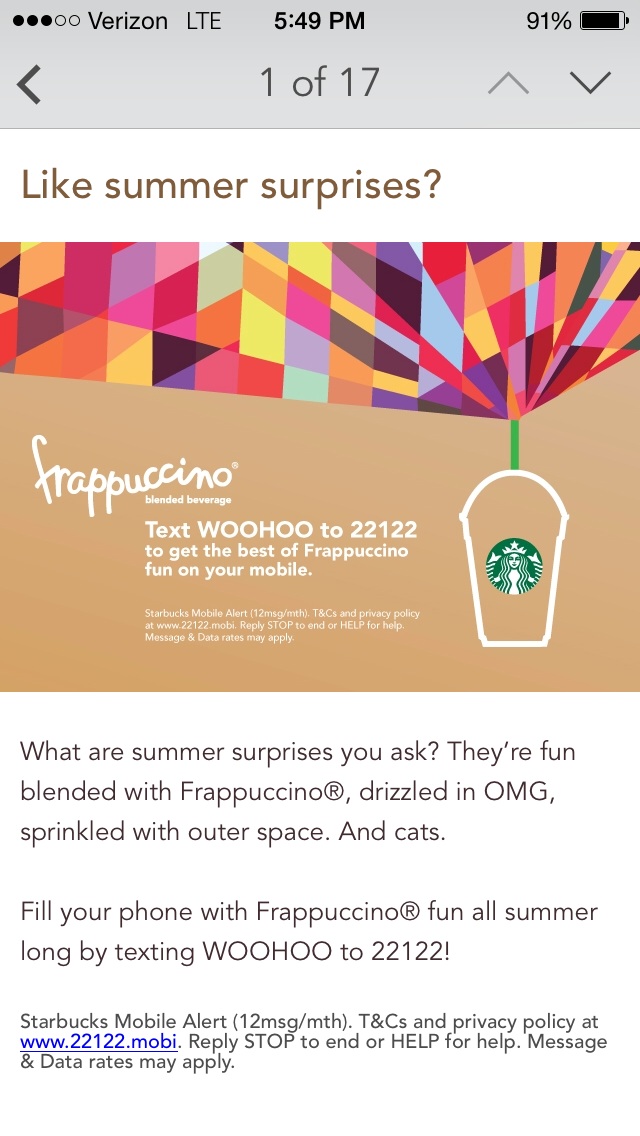 Not an everyday or even weekly customer, I was immediately interested at what the "summer surprises" could be. But mostly, I loved the text-in keyword "WOOHOO."

Winning Combo of SMS and MMS

Upon texting WOOHOO to Starbucks's short code, I was greeted with promises of Frappuccino fun all summer long. 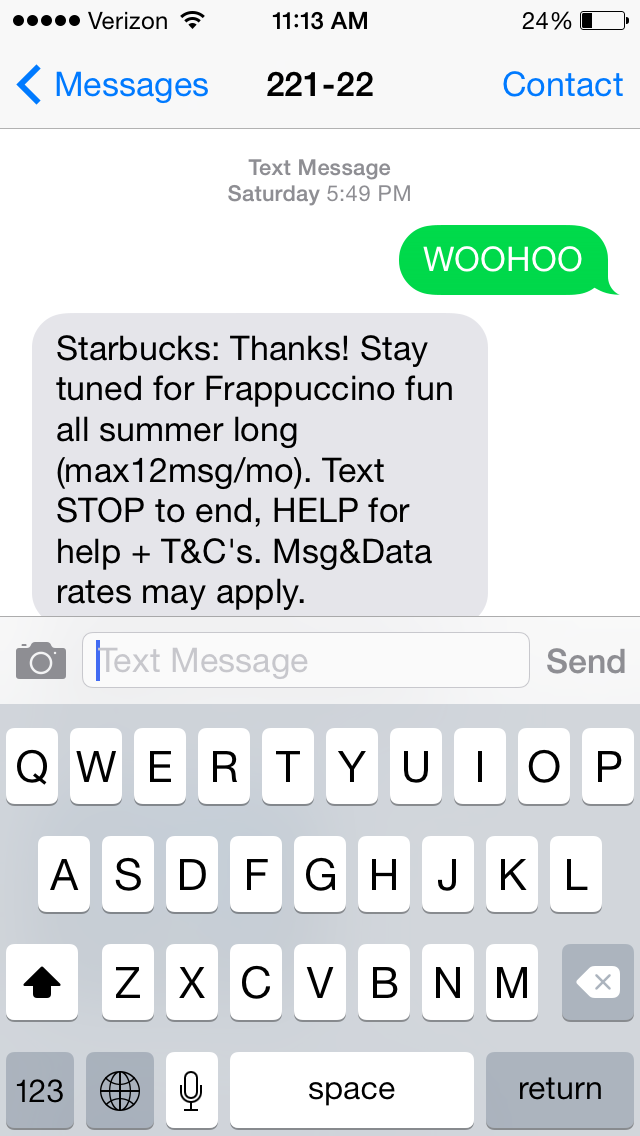 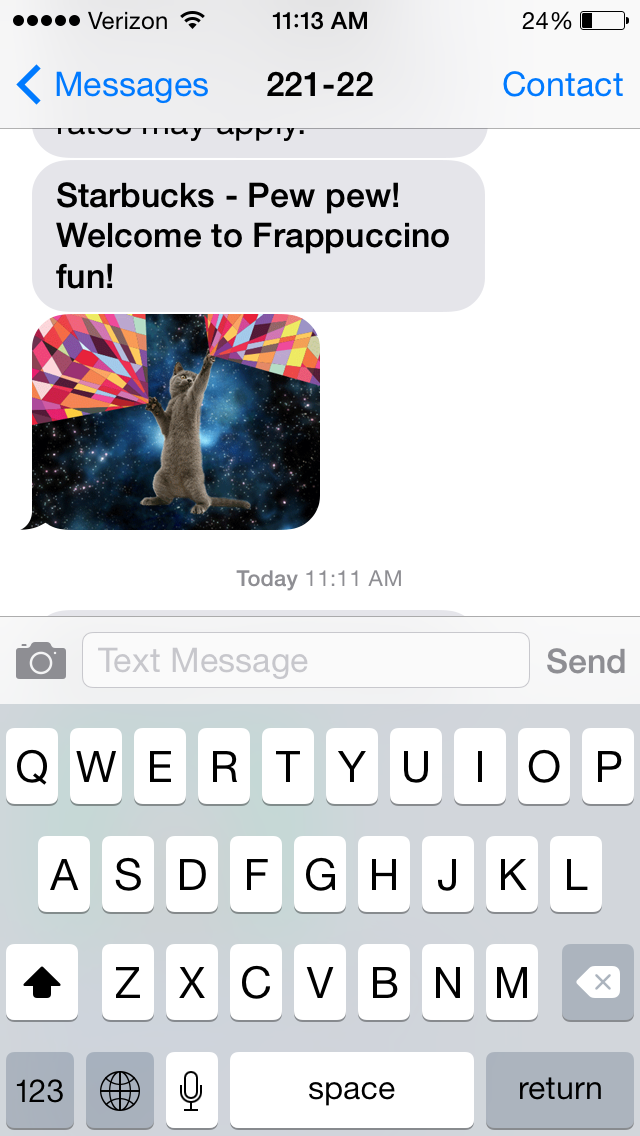 And this awesome animated gif (that's with a #hardG).

WOOHOO isn't the only keyword out there. Starbucks has cleverly woven several different taglines and ideas into this summer campaign, including SMILE, FLASHY, and SAYYES. I've yet to determine whether any of these differ from the original campaign, as I've received the same welcome message for each keyword, followed by slightly different copy for the cat gif. Starbucks may be using different keywords and taglines to determine where opt-ins are coming from, but I may just be guessing. However, here's a quick recommendation: It's super important to consider the customer's experience when using multiple keywords. No one wants to get the same message twice (or three times). Even if the program is the same across the keywords, change up your copy and images to keep it fresh.

By the time May 1 rolled around, I had practically forgotten about my WOOHOO moment, until this gem appeared on my phone: 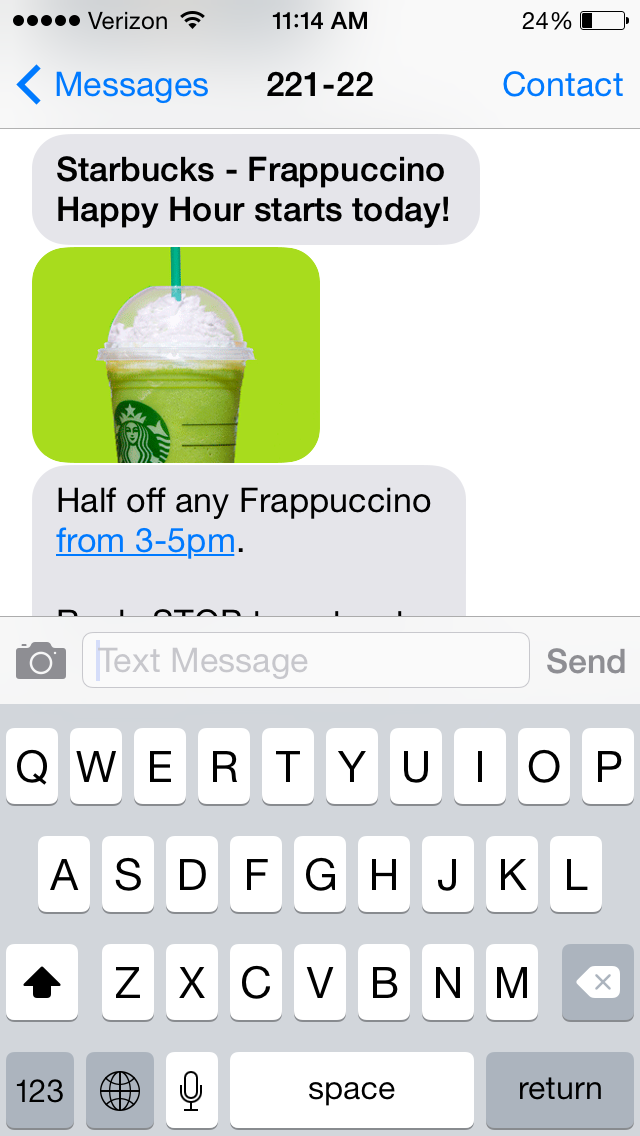 This engaging interaction continues with a message cadence of every other day (so far). In an effort to cross-promote their My Starbucks Rewards program, the most recently received message touts an hour extension for members: 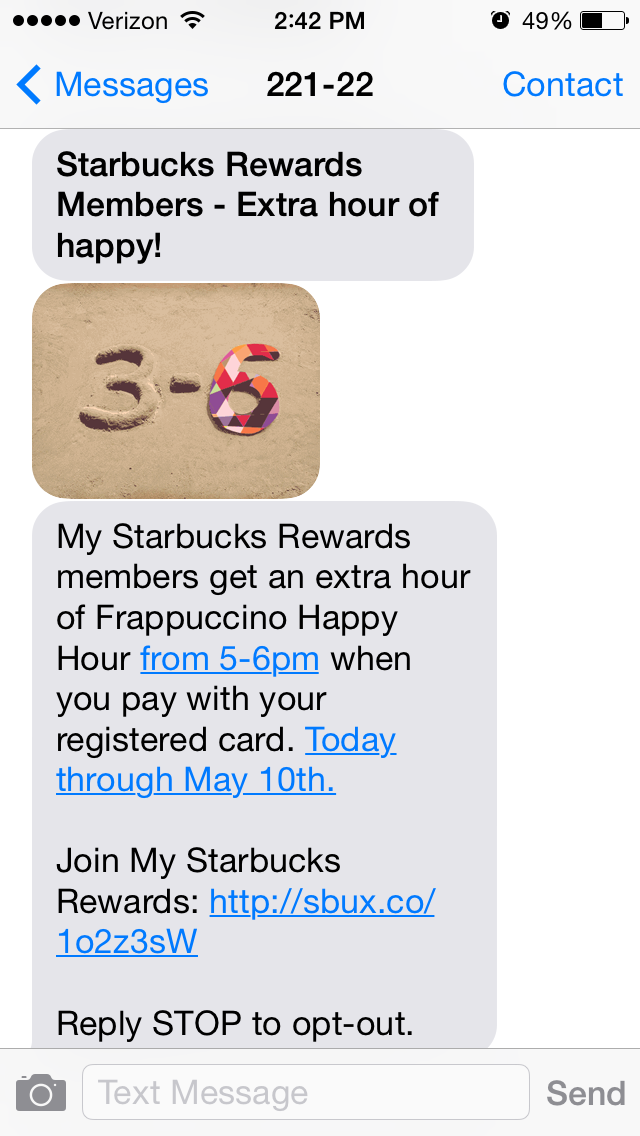 Not to mention another in-app message: 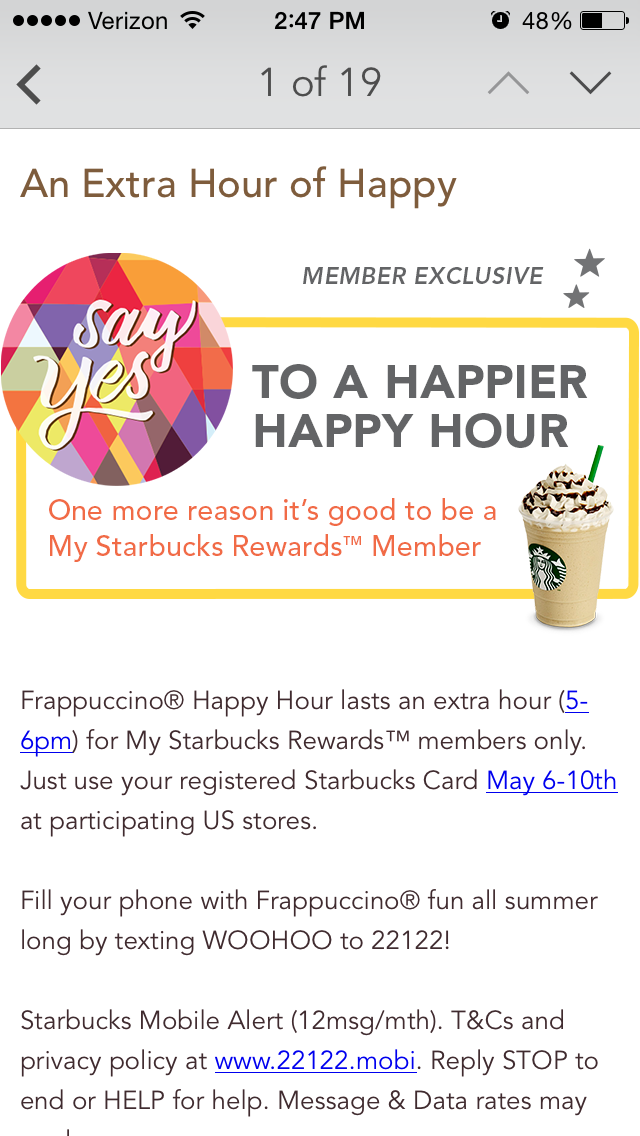 As you may have guessed, Starbucks did not go light on the social presence for this campaign either. What surprised me were the separate identities between "Starbucks" and "Starbucks Frappuccino." The frap has its own Twitter, Facebook, and Tumblr. Both identities are working in tandem to promote #FrappuccinoHappyHour, but luckily not overlapping any content. 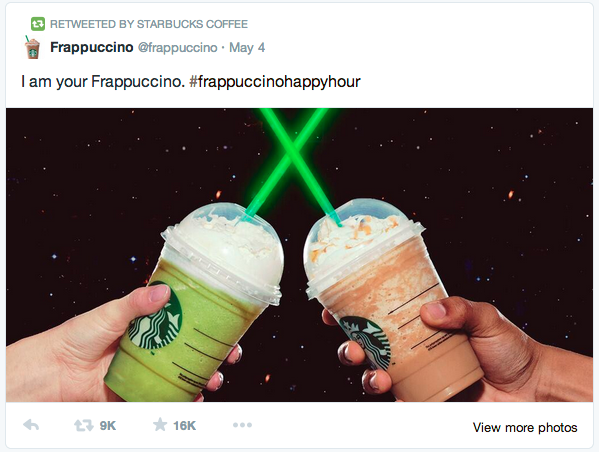 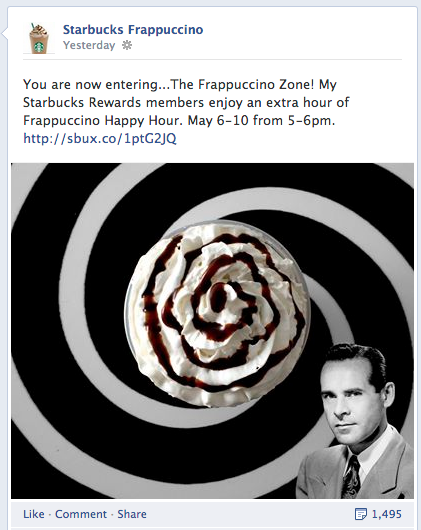 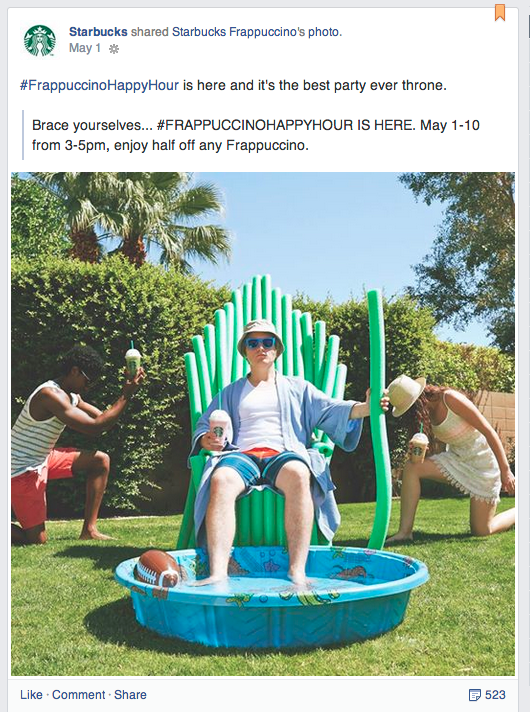 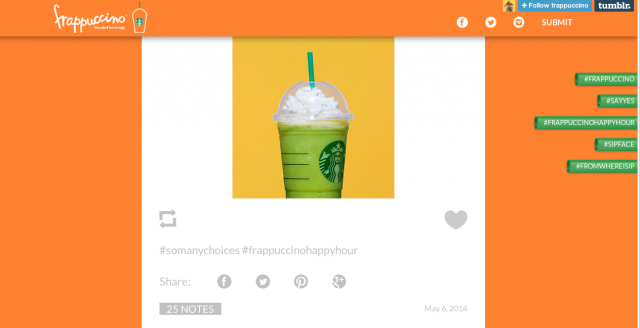 And while not as heavy of a promotion tool, Starbucks's Instagram is always easy on the eyes and fun to scroll through. They've made sure to help with cross-promotion efforts. 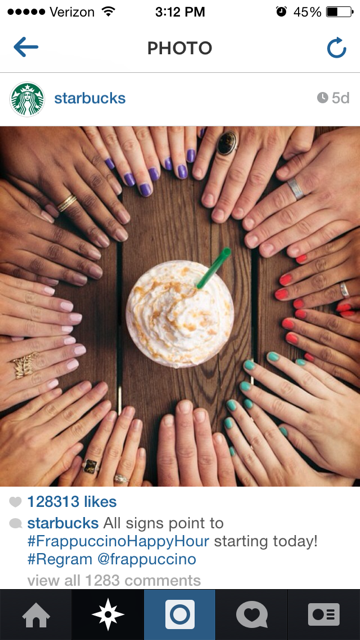 What We Can Learn

Yes, Starbucks crushes the cross-channel challenge. But what can other (and smaller) brands and organizations learn from this?

What are some of your favorite cross-channel wins? Comment below or tweet us @ExactTarget with the hashtag #ETSpark.