Elegant Design Is Key to a Brilliant Org Chart App

in IT, Apps, Developer Here’s a good problem for a company to have: you’re growing so fast it becomes hard to keep track of who’s working for whom. Salesforce faced this problem and found that, as it grew from 4,000 employees in 2010 to more than 16,000 as of 2015, it became necessary to build an org chart that detailed the relationships among its employees.

The designers wanted an org chart that would be a personal and friendly experience, rather than a huge list of faceless nodes in a sprawling company.

“You couldn’t avoid the fact that you need to know who you work for,” says Wendell Martin, software engineer, “but we did want to make it a personal experience. Even though it’s a complicated hierarchy, we wanted to keep the employee at the center of the app.”

They spent six months developing the Salesforce Org Chart, building it out even as the company kept growing. The interface was straightforward enough, and indeed employee-focused, displaying bosses above and subordinates below, and contact information on either side. A sort of family tree, but adaptable to the movements of employees within the company.

The Org Chart is a cross-platform product, seamlessly combining native Salesforce technologies with popular open source options. Building on App Cloud, a Canvas app loads an AngularJS page served from a Node server running on Heroku into Salesforce1. A middleware layer on Heroku serves as a data aggregate, pulling data from multiple Salesforce Orgs. The user authentication between these multiple Orgs comes from an internal implementation of Salesforce Identity.

At the heart of the app, the source of truth is an internal human resources org called Supportforce, which hosts most of the employee data structure, while the profile pictures are pulled from Salesforce’s primary internal org. Pulling information from multiple data sources is complicated, but, says Martin, “as an end user, you won’t notice the leap.”

And, of course, the employee is kept at the center. “Org charts can be very harsh, and we wanted to be much softer,” says Martin.

The employee focus is subtle: the app loads an employee’s picture first. Other effects, like the animations, give it a more responsive life and feel. This was the result of the other big piece of the development puzzle: a dedicated UX designer who worked to develop an app that didn’t feel like a grudging, obligatory piece of workplace software.

“From a developer perspective, there’s a little bit of a tendency to look at function exclusively,” says Martin. “But a user’s tendency is to look at an application more emotionally.” The team wanted to make sure it built an app that looked and felt good to use. With so many beautiful and elegant consumer apps available for personal use, it would be disappointing to have a clunky interface for Salesforce to explain itself to its employees.

“We were trying to provide more than the lowest level,” says Wendell. He says the team wanted to build, instead of the minimum viable product, something that was the “minimum viable awesome.” “We wanted it to be delightful or humorous or engaging. There was a desire for that because that’s what people expect from applications they’re using in their personal lives.” 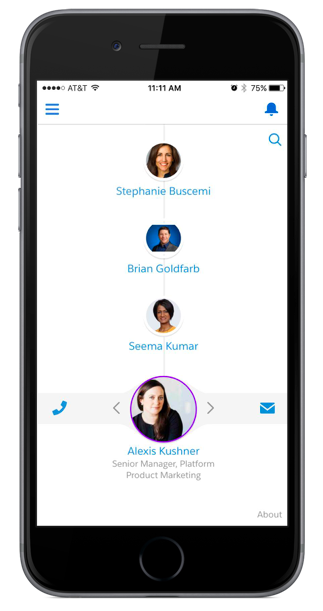 The success of the Org Chart lies in its ability to expand the work Salesforce employees do, and their knowledge of their own company, to their mobile phones. But also in its popularity. From the beginning, Salesforce customers expressed an interest in getting their own version of the Org Chart.

At the time, says Product Manager Keld Bangsberg, who also worked on the project, the app was a custom implementation and therefore difficult to simply be rolled out to other companies. But now there’s a version available on the AppExchange. “I think there’s a great deal of value in creating a team similar to this team, that’s dedicated to solving these problems for its employees, spending a little more time thinking about these things in a way that matches the quality of consumer apps,” says Bangsberg.

Connecting disparate organizations with elegant UX aligns with Salesforce’s goal of connecting the customer to the company. In this case, though, the customer is the employee.

“Part of what we’ve tried to do is reduce the friction of working at Salesforce,” says Bangsberg. The design team wanted to make understanding the workings of the company, even as it changed, intuitive enough to allow employees to do their jobs better. “Let’s make it as easy to do your job as possible so you can add value rather than spending time trying to track down information from disparate points.”

Want to know more about finding and fixing the pain points of your business? Read on!