To Advertise to the World, Just Use Facebook and Google Mobile Apps

Every digital marketer knows that they need to have a "mobile strategy". In fact, marketing executives started demanding answers to "what's our mobile strategy" many years ago. As Benedict Evans said in his latest "Mobile is Eating the World" presentation, it's now "obvious but boring: apps have won mobile." However, to be successful in digital marketing and advertising today, you must understand the current landscape and which companies dominate.

If you spent 100% of your budget just on mobile advertising within apps served by Facebook and Google ad inventory, you'd be well on your way to reaching every single digitally-connected person with highly relevant and targeted ads. 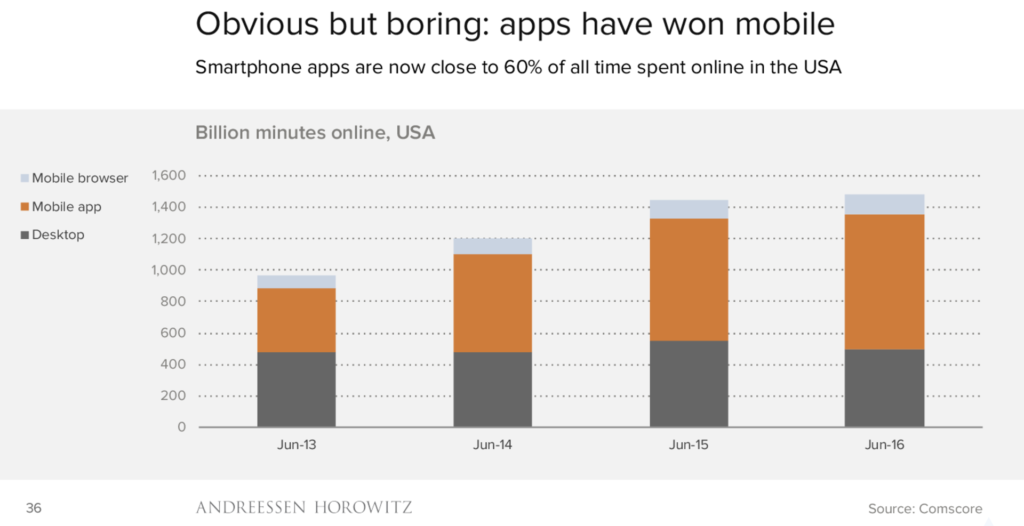 However, when we, or Evans, talk about the dominance of mobile apps, it's a relatively short list of individual apps and companies that are dominant. The largest mobile web browser is actually Facebook -- and the Facebook app has 15-20% of all mobile time in just primary app. 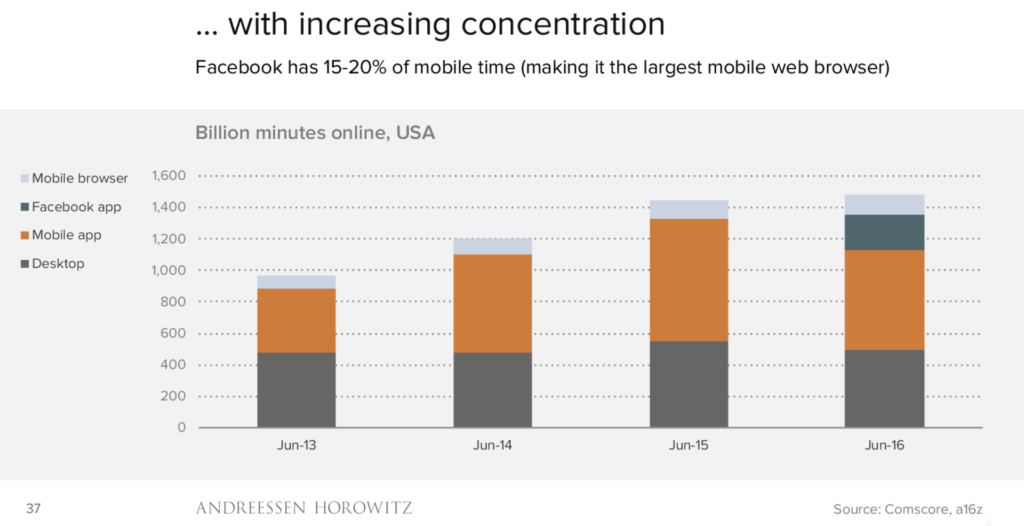 Overall, mobile app usage patterns have become extremely concentrated -- it's not just the primary Facebook App. In the United States, the top eight apps are all owned by either Facebook or Google, and the remaining two of the top ten are the other members of GAFA -- Amazon and Apple. Facebook has three apps with over 75 million monthly active mobile users in the US and Google has five (including their store). As strong as those numbers sound, they don't even include WhatsApp, which has a billion users worldwide. 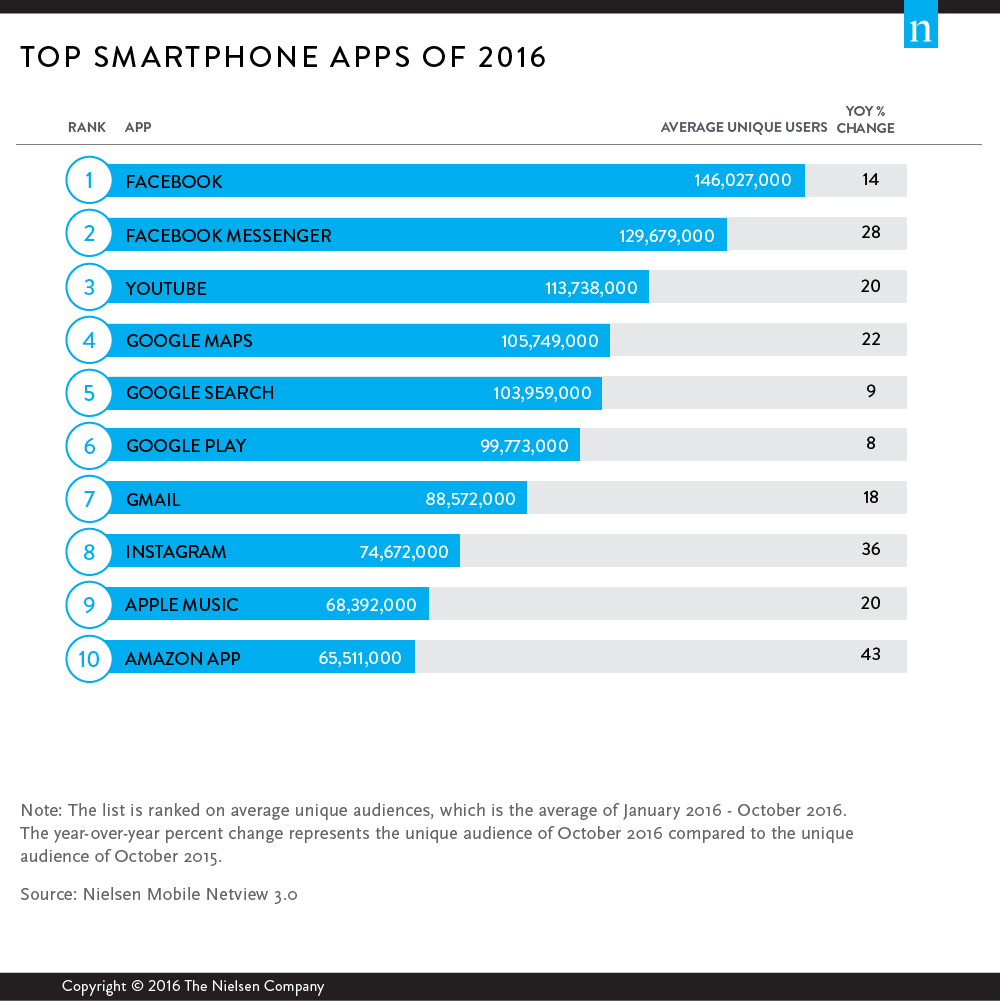 Diving deeper, Facebook's number one spot in the United States is bolstered by 1.7 billion monthly active users (MAU) worldwide, one billion of which are mobile-only; users that never log on from a desktop. In addition, Facebook has both Whatsapp and Messenger with over one billion MAU each -- neither platform is yet monetized with advertising, but Facebook is already experimenting with Messenger ads and using Whatsapp data to target Facebook ads. Instagram, however, is a great home for highly visual ads (both images and video) and has 600 million MAU of its own.

There's a final pillar of the Facebook mobile strategy, at least when it comes to its reach for advertising -- the Facebook Audience Network reaches more than one billion people (not devices, people!) on its own. 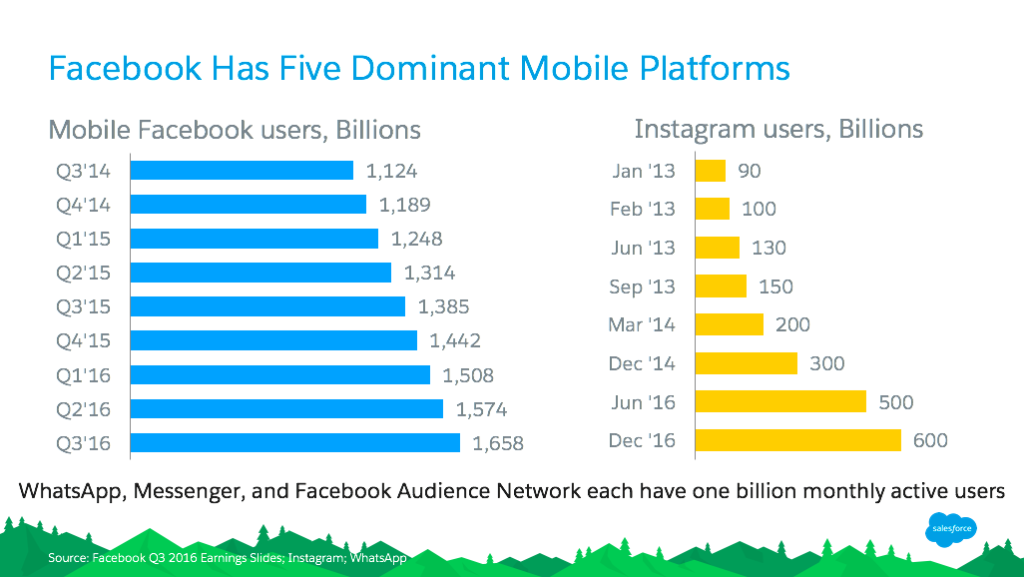 Of course, Facebook is just one of two platforms that dominate mobile, alongside Google. On mobile alone, YouTube reaches more of they key 18-34 or 18-49 age demographics than any cable network in the United States. There's over a billion Facebook users worldwide, and when they watch video, more than half of the total views are on mobile.

Gmail is another platform with a billion worldwide users (sense a trend?), 750 million of which check email on a mobile device.

Finally, the world's largest advertising platform, Google Search, has more mobile searches than desktop in ten top markets, as of 2015. This is why eMarketer estimates that more of Google's advertising revenue came from mobile than desktop in 2016, and its revenue will be 63% mobile by 2018. 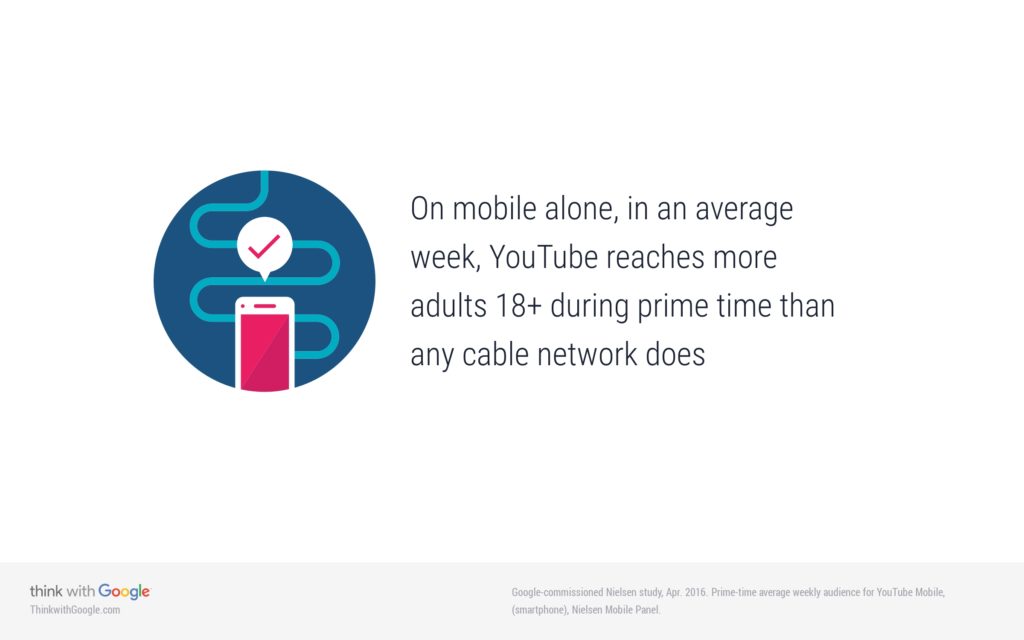 What does all of this data about Facebook and Google on mobile mean for you as a marketer? These two platforms, and all of the places that they enable mobile advertising, should be your first stop for essentially any ad campaign. You can now use your own CRM data to enhance advertising across Facebook, Instagram, the Facebook Audience Network, Google Search, YouTube, and Gmail to target people as they use their phones to go about their daily lives, whether they're just on the train to work and thinking about their weekends or actively in a store shopping and checking their phone for information about products.

For more information about how Salesforce can help you with your advertising strategy, see our webinar on the Future of Advertising.