Phil King Ran Across the U.S. — Hear His Amazing Story.

Phil undertook this incredible coast-to-coast quest to raise awareness for suicide prevention. That means he ran over 4,300 miles over almost eight months – the equivalent of six marathons every week – to support a cause close to his heart. Salesforce caught wind of his phenomenal journey, and jumped in to help him cross the finish line and bring awareness to his cause. Employee volunteers were there every step of the way (okay, not literally every step, but you get the idea) to support him and make sure he completed his journey. Learn all about it at RunForLisaKing.org.

Phil joined us at Salesforce several weeks ago and sat down with Mike Wolff, SVP, SMB Sales, to share his story and the lessons he learned on the open road. Scroll down for highlights of his inspirational interview.

Tell us about your background.

A few years ago, I was lazy and unmotivated. I dropped out of college and was willing to let life pass me by. I was selfish, and didn’t put thought into how my actions affected or hurt others. It was a sad existence. I wasn’t happy with how I was living.

I lost my mother to suicide in 2014, and that changed everything. It was her second attempt; she had tried to take her own life three months prior. Those months in between were the hardest of my life. We took her to so many doctor appointments and tried to get her help – even harder than losing my mom was watching her not want to live anymore. Not long after that, I also lost my best friend to suicide. These devastating experiences made me realize that I wanted more from life. Moving forward, I wanted to bring positivity into this world by helping others. 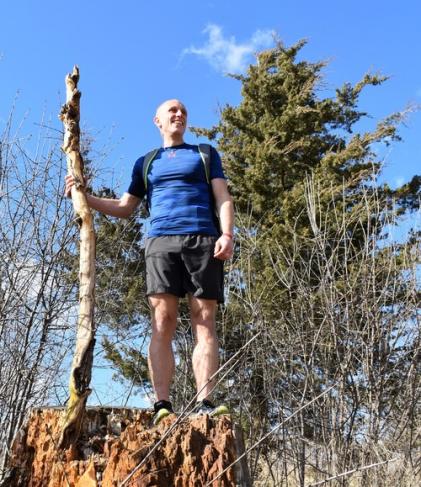 How did you land the idea of running across the US?

Running is my passion and favorite thing to do. It helps me blow off steam and builds confidence, and is what helped me turn my life around. I wanted to give back as much as I possibly could by taking on a big running challenge – a story that people would want to share.

What were you looking to accomplish?

My goal was to help others struggling with suicide. I wanted to create a motivational story to tie to the cause, and show the value of never wanting to give up, no matter how hard things get.

When you shared your plan with friends and family, what was their response?

They already knew I was crazy! They weren’t that shocked. But while my close friends and family were extremely supportive, I did have a lot of doubters. I had to prove I could do it to people. But that just added to my motivation.

How did you prepare for a journey like this?

I had a great trainer – he trains the men’s Olympic swim team – who helped me get to where I needed to me. There was also a lot that went into it logistically, like routes, supplies, planning, and more. That’s not my strong suit, but luckily, a mutual friend connected me with Salesforce, and amazing volunteers including Caren Wachtenheim and her husband, Joe, stepped in to help.

I would wake up between 5:00 and 6:30 a.m, and immediately cram 2,500 calories into my mouth. Then I would do some light stretching and pushups to get my body warmed up. I’d hit the road as early as I could, and run for four or five hours. Then we had to figure out where to park the RV. At night, I would have protein shakes and carbohydrate supplements, and make sure I got enough sleep before I did it all again the next day.

What did you eat on the road?

I was eating about 5,000 - 7,000 calories a day. I’m a vegetarian, and it was often a struggle to find fresh fruits and vegetables on my journey. I ended up eating a lot of canned and frozen vegetable, peanut butter and banana sandwiches, quinoa and veggie wraps … and a disgusting amount of broccoli.

How many pairs of shoes did you go through?

Did you encounter any curveballs?

I came to a point on the American Discovery Trail in central Iowa where there was no road access for 100 miles at a time. All our research and planning went out the window. I had to illegally run on the interstate and play hide-and-seek with the police. And another time, part of the trail was completely flooded and I had to practically swim for two miles!

Did you have any injuries or health issues?

A car ran me off the road in Utah, I fell down a steep grade, and experienced two significant tears in my hip flexor. It hurt so badly I went into shock. My whole body started shaking, and I had to limp back to the RV. It took me awhile to get back on the road. My pace had dropped significantly, and it wasn’t pretty. If you had seen me running, you would have either called an ambulance, or thought, “This guy’s really drunk!” But quitting wasn’t an option.

What was the scariest thing that happened?

I had a gun pulled on me in Ohio. An older gentleman, who was drunk with an angry pit bull, threatened me and refused to let me through as the trail crossed his property. When he finally went inside to get something, I saw my chance and sprinted past.

This type of journey takes amazing mental fortitude. What lessons did you learn?

Chase your dream, whatever it is. I wanted to do a run like this for years, and life almost passed me by. Now I don’t have to spend the rest of my life wondering, “What if?” Go for what you want – even if you don’t make it, you’ll learn so much about yourself. And work hard. Keep grinding away, believe in your process, stick to your routine, and eventually you’ll make it.

Did this experience help you deal with your grief?

It was exactly what I needed. I had so much alone time to think and put things in perspective. It was a great growth experience.

What’s next for you?

I plan to get certified as a dietician, and ultimately become a consultant for endurance runners who want to pursue their own running adventures. And I’m still running. I want my next run to be even bigger and faster.

What do you want others to know about suicide?

Suicide is an epidemic. Over 40,000 people in America take their own lives every year, and for every suicide, there are 25 attempts. And 90% of the time, these people had a diagnosable psychiatric disorder. We need to bring awareness to those disorders because suicide is a symptom of them.

How we can help those in our lives who are struggling?

Be mindful and observant. Take notice of whether others are sleeping too much or too little, or vocalizing any thoughts of depression or suicide. Step in when you see friends having a hard time – that act might change their perspective or encourage them to seek help. Give others the opportunity to share; sometimes one conversation can change an entire future. Showing you care makes the biggest difference in the world.

To get involved, visit RunForLisaKing.org.

Interested in learning more about our values and culture at Salesforce? Get to know us at salesforce.com/careers.

Empower Employees: Let Them Choose How to Give Back
By Jon Stahl