5 Studies that Prove Cubicles are Superior to Open Office Plans This past week, April 28th, was National Cubicle Day — which got me longing for the days when open office plans weren’t en vogue.

For open office devotees, you have Italian architect and interior designer Gaetano Pesce and ad executive Jay Chiat to thank. Chiat was the owner of Chiat-Day, a hip ad agency in New York. He hired Pesce, known for his bright colors and playful design, in the mid-nineties to redesign the Chiat-Day office with the goal of tearing down barriers and boosting creativity among its workers. (If you want to learn more, check out the excellent Planet Money podcast episode about the history of the open office.) Chiat-Day’s new colorful, living room-esque office layout gained a ton of publicity, and tech companies like Google and Apple — and now basically everyone — adopted the ideas. According to recent surveys, about 70% of workers are now in an open office space.

But what happened to Chiat-Day? The original open office actually had a relatively short shelf-life. A few years after it debuted, Chiat-Day moved to a more traditional space. 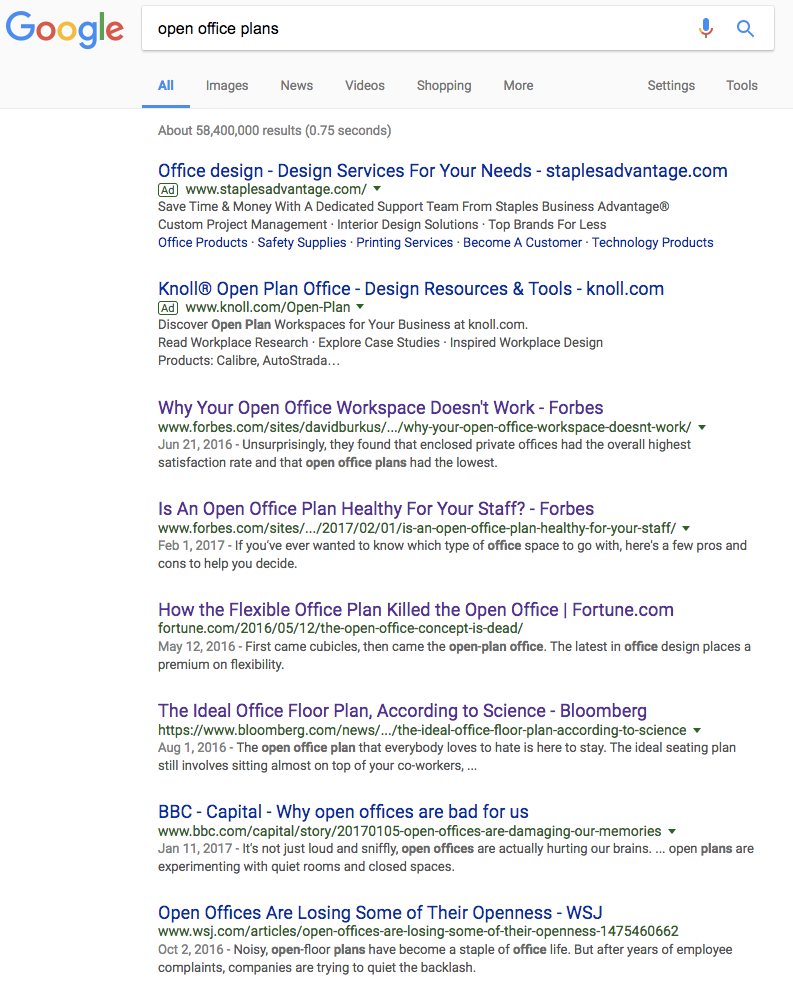 When it comes to open office environments, many have anecdotal information that supports how distracting they can be — such as the guy who always talks to loud on the phone, the woman who randomly drops by your desk and starts yakking even when you’re in the middle of something, and how cold and flu season seems to rampage the entire floor at once.

There’s a growing mountain of evidence that open offices hinder, not enable, employees. Here are five of the most damning statistics:

Part of the appeal of the open office concept is it’s cost-effective in that you can fit more people in the space. But a study from the National Center for Biotechnology Information found that, “Occupants sharing an office and occupants in open-plan offices had significantly more days of sickness absence than occupants in cellular offices” (aka cubicles).

David Craig published an article in the Academy of Management Journal that summarized his survey of 38,000 workers. He found that interruptions by colleagues were detrimental to productivity. Additionally, the more senior the employee, the worse he or she fared in terms of productivity lost.

Time and time again, noise has been tied to reduced cognitive performance. Psychologist Nick Perham found that office commotion impairs workers’ ability to recall information and even do basic arithmetic. Many people in an open office environment own a pair of headphones to help block out noise, but unfortunately, this isn’t much better. Even the music impairs our mental acuity, according to Perham.

Last but certainly not least, there’s the stress factor. Two Cornell University psychologists, Gary Evans and Dana Johnson, found that clerical workers who were exposed to open-office noise for three hours had increased levels of epinephrine. Epinephrine is a hormone that is commonly referred to as adrenaline, associated with our flight-or-flight response.

So are you #TeamCubicle or #TeamOpenOffice? Let us know by tweeting @Salesforce

This blog post reflects one employee's view and does not reflect the views of Salesforce.