Here’s a closer look at this year’s holiday shopping trends:

Digital shopping surges on Black Friday: While Cyber Monday e-commerce revenue was up 15 percent, Black Friday saw the largest increase at 32 percent. Thanksgiving Day came in as the second most popular shopping day this holiday season with revenue up 30 percent YoY. The combined 26 percent revenue growth of the three days is nearly double the 15 percent growth rate in Q3 of this year.

Consumers opt for mobile commerce this year: Consumers turned to their mobile phones in unprecedented numbers this year. In fact, phones accounted for 60 percent of traffic to retail sites and 41 percent of orders during Cyber Week. What’s more is that for the first time ever, computers accounted for less than half of all orders, proving that mobile is not just the first screen for browsing, but also now the first screen for checkout.

AI delivers outsized results: One of the brightest stars this Cyber Week has been AI. Retailers have been talking about personalization for quite some time, but now we are directly seeing the impressive impact of personalized content, products and information during Cyber Week. On Black Friday, only six percent of consumers engaged with product recommendations, but those shoppers accounted for 30 percent of all digital revenue -- a 5x return on each shopper. On Cyber Monday, five percent engaged with product recommendations, which accounted for 24 percent of digital revenue that day.

Social media drives retail impact: Social traffic to retail sites increased to five percent overall, and seven percent from mobile, underpinning the importance of mobile marketing in driving commerce traffic. In looking at social media conversations during Cyber Week, Black Friday mentions were down YoY with 3.4 million mentions (compared to four million in 2016). Sentiment also saw a slight decline YoY, but remained positive at 75 percent. PlayStation, Xbox and Apple were the most frequently talked about products. And, in order, the top hashtags were #givingtuesday, #blackfriday and #cybermonday. 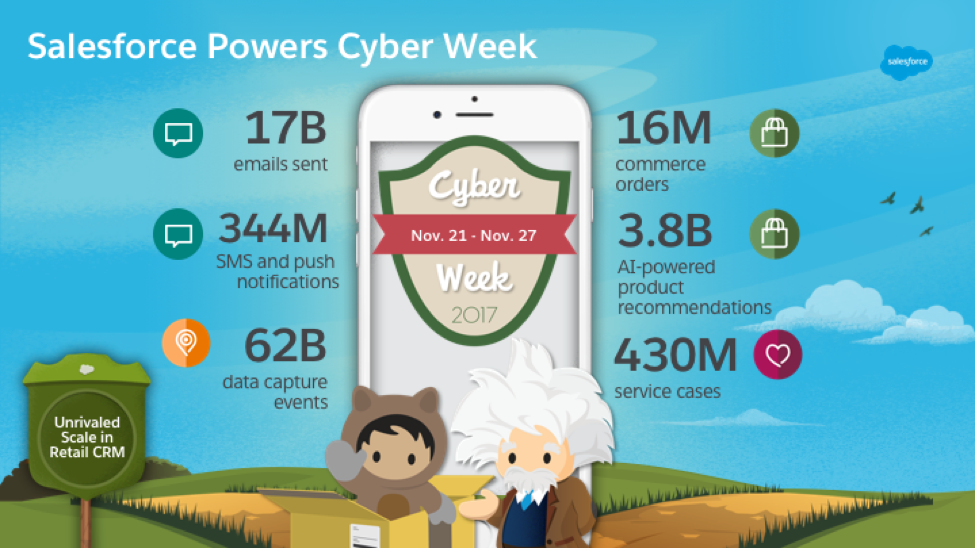 For more information on how to run your retail business on Salesforce, please click here.

Salesforce combined data-based insights on the activity of hundreds of millions of global shoppers across more than 30 countries powered by Commerce Cloud, and millions of public social media conversations through Marketing Cloud Social Studio. This is in addition to data from Salesforce’s 2017 Connected Shoppers Report, which is based on responses from 2,011 adults 18+ in the US, among whom 529 are Millennials (ages 18-36), 530 are Gen Xers (ages 37-52), and 737 are baby boomers (ages 53-71). This online survey is not based on a probability sample and therefore no estimate of theoretical sampling error can be calculated.

You Need to Uplevel Your Order Management System — Now What?
By Kemberly Gong

How to Level Up Your B2B Commerce Solution
By Kate Sheridan