69% of Consumers Prefer Chatbots For Quick Communication with Brands The new consumer mandate is speed, and a brand new joint project between MyClever, Drift, Salesforce, and SurveyMonkey Audience has just found chatbots as fulfilling this very need. In the State of Chatbots 2018 research, it was found consumer feel chatbots are 35% better at answering both quick, and complex questions than applications. 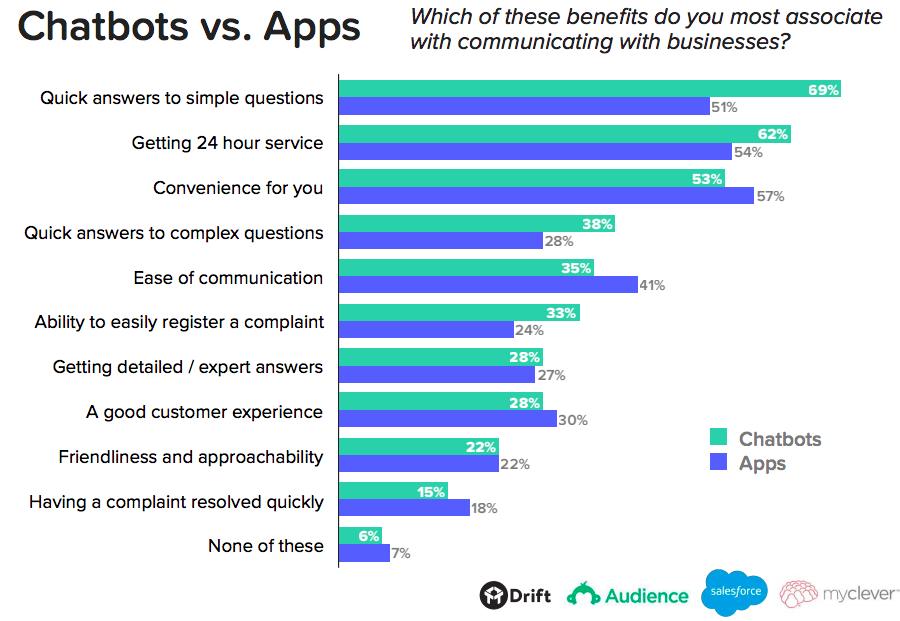 This need to provide fast service 24/7 isn't just a millennial mandate either. In fact, baby boomers are more likely than millennials to predict they'd see greater benefit from chatbots in 5 of the 10 uses cases studied. This alters the notion that modern technology is only affecting younger generations. 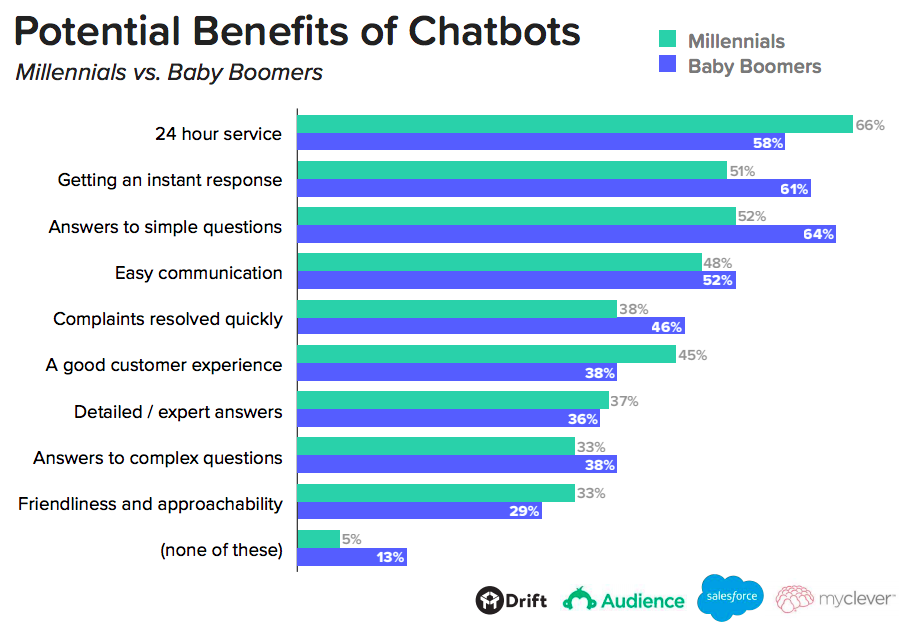 Many brands have not adopted chatbots for various reasons. One of those reasons simply may be they don’t believe their consumers want them. The research above easily dismays this notion and highlights chatbots' potential value. Many brands and leaders have also already been using chatbots and have shared their results, like Jay Baer.

In a recent conversation with Jay Baer, he mentioned he has begun utilizing chatbots as a way of engaging with his audience and distributing content. Their initial findings were their chatbot is seeing 10X the open rate with content, and 5X the engagement with that content, compared to email.

Guillaume Cabane, former VP of Growth at Segment used a chatbot to help with their lead qualification, and lead generation efforts. The bot was combined with other technologies allowing it to be deployed only to specific customer segments, with specific talk tracks. After three weeks of the deployment, the chatbots became the number one source of leads for Segment, and year to date the chatbots deployment is the largest single factor of Segments growth. Specifically, engagements have increased by 5X and conversions 2X. The best result as Guillaume would say is, “100% of his sales rep now love him.”

Consumers also felt there are situations where Chatbots are not useful. Only 9% of consumers find chatbots useful in their attempt to purchase an expensive item. Most likely this is because 30% of consumers surveyed greatest worry about the chatbot is that it would make a mistake.

As we continue to move into an increasingly technological society, we must not let our old ideas of consumer behavior stand in our way. Studies like this one clearly show all demographics are finding value with modern media and in ways we have never expected. Moving forward, brands should look to identify places where technology can solve issues for consumers faster than a human, and begin to implement chatbots as a way of improving the customer experience.