Stay up to date with all the latest news from the conference. Click here.

Salesforce brought a forest to downtown San Francisco on Tuesday, then filled it with Trailblazing customers from around the world, gold-hoodied admins of boundless enthusiasm, $18 million in grants to address key needs, and new kinds of artificial intelligence to help businesses.

The sprawling Dreamforce conference, now in its 16th year and built with National Parks-themed decor and more than 400 live trees, was filled with news and fun. "This is a celebration of you, our Trailblazers, of everything you are doing. It's an incredible moment." – Marc Benioff, Salesforce Chairman and Co-CEO told a packed crowd in Tuesday's main Dreamforce keynote livestreamed here. Marc pulled a rockin' friend up on stage whom Dreamforcers will hear a lot from this week. "The music business is in constant transition. You always have to keep on your toes – kind of like the tech world," Drummer Lars Ulrich explained of how Metallica – playing Wednesday's Dreamfest concert – connected with fans to become the No. 1 rock band on social media.

There was other music news in the main keynote on Tuesday: Janet Jackson – a Trailblazer who has sold an estimated 100 million records worldwide – will also perform Wednesday night, Marc announced.

There's more on Marc's keynote on the Salesforce Blog.

Beyond the news – LOTS of exploring!

Day 1 of Dreamforce includes lots of exploring and just taking it all in. Did you see that great waterfall at the entrance to the Dreamforest? (If not, you can find it in this Navigating Dreamforce post.) Lots of Trailblazers took photos and videos of it. You can do even more. The Dreamoji app lets you add one of the Salesforce characters in motion. We have a feeling that Codey the bear will never quite reach Cloudy the goat and Astro, no matter how many times he jumps. Today, as Dreamforce 2018 opened in San Francisco, Salesforce.org, the philanthropic arm of Salesforce, announced $18 million in grants addressing three important issues facing the city of San Francisco: public education, homelessness and cleanliness. “Speaking as a fourth generation San Franciscan and somebody who grew up in this city, I’m excited that we can take the power of Salesforce and the power of all our customers and community, and give back to the city in a meaningful way,” Marc Benioff, Salesforce Chairman and Co-CEO said. “This Dreamforce is dedicated back to San Francisco. We are now more than halfway to our goal of giving $100 million to our local schools.” Read more. Lovefest Between CTO and Super Admins Salesforce's ultimate users gathered in one room Tuesday with co-founder and CTO Parker Harris to hear about the company's latest tools and the best ways to use them. Parker told the enthusiastic crowd that 48% of Salesforce admins are women. Katherine Clark, a member of Vetforce, the Salesforce community devoted to veterans, urged businesses to hire veterans as they learn skills on Trailhead. #AwesomeAdmins Those Monks Are Really Popular Monks from Plum Village Monastics in France arrive at Dreamforce, where they will lead two-dozen meditation sessions. Their meditation house was at capacity on Tuesday.

Put Down Your Phone and Listen – And the Crowd Did Perhaps only Tristan Harris (above) could get a room full of techies to put down their phones for a full 28 minutes. “Technology is a very powerful force for persuading what people do,” he said to a crowd of early risers at the Yerba Buena Theater. “Humane technology is going to start by looking at an honest appraisal of human nature. Yes, we’re vulnerable to social validation, yes we’re vulnerable to magician’s tricks, yes we’re vulnerable to supercomputers…” Before co-founding the Center for Humane Technology, Tristan was Google’s first design ethicist — and before that, studied at Stanford alongside the Instagram co-founders who announced their Facebook departure just today. Tristian points to dozens of hair-raising examples that highlight the persuasive power tech wields, and points to study which showed 72% of teens believe that tech companies manipulate users to spend more time on their devices. “Humane technology is possible if you’re looking at how we leverage human strengths. If you start with a vulnerable and compassionate view of human nature, we can fix it.”

360-Degree View of Your Customer

Heard about Salesforce Customer 360? You will. The new cross-cloud technology initiative makes our B2C Marketing, Commerce, and Service products work better together. So if a customer has a record in Marketing Cloud, another record in Commerce Cloud, and another record in Service Cloud, the system knows they are one person, not three people, so you can engage them accordingly.

Last night, Dreamforce (officially) kicked off with the 7th annual Salesforce Women’s Network reception where visionary leaders from PG&E, Girl Scouts of USA, Care.com, and more came together to discuss the important role that women play in driving the future of tech. Said Care.com’s CEO, Sheila Lirio Marcelo: “Don't forget the humanity we all have as we develop companies and careers; the core of [what we do] is to care about people."

New Kinds of Jobs Are on Their Way in Autonomous Cars

“If you had asked networking experts in the 1960s “What sort of impact do you think this new ‘internet’ thing will have on jobs?”, none of them would have predicted that “Twitter Social Media Manager” would be a job forty years later.”

It’s all too easy, as Richard Socher, Chief Scientist at Salesforce, put it, to assume that “when you automate something, the jobs are gone. Not so - new kinds of jobs can happen”.

Like what, you might ask? People are braced for considerable change in the transportation industry as autonomous driving technology takes hold. In time, Socher suggests, that will lead to a markedly different kind of in-car experience. We may get a “hairdresser car, a meeting room car, a tea car - where you can get in, have a meeting over a cup of tea and get to your destination.”

Have You Seen This Gold Daredevil? 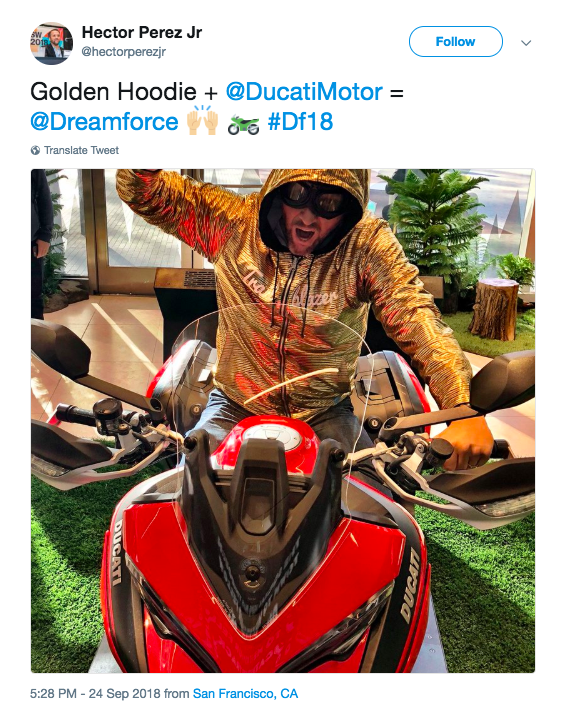