Your Guide to Transportation at Dreamforce '18

Pedicabs, shuttles, BART, Muni, walking, oh my! Our little “City by the Bay” will get pretty jam-packed during Dreamforce '18 so in order to maximize your time here, make sure you know how to get around the campus, to and from your hotel, and more. Let this be your one-stop transportation guide for everything Dreamforce:

We can say with the utmost certainty that the best way to get yourself from place-to-place around the Dreamforce campus is using your own two feet. Make sure you're wearing comfortable walking shoes to get around! And to figure out how far you need to walk, check out the distance in miles between each Dreamforce venue: 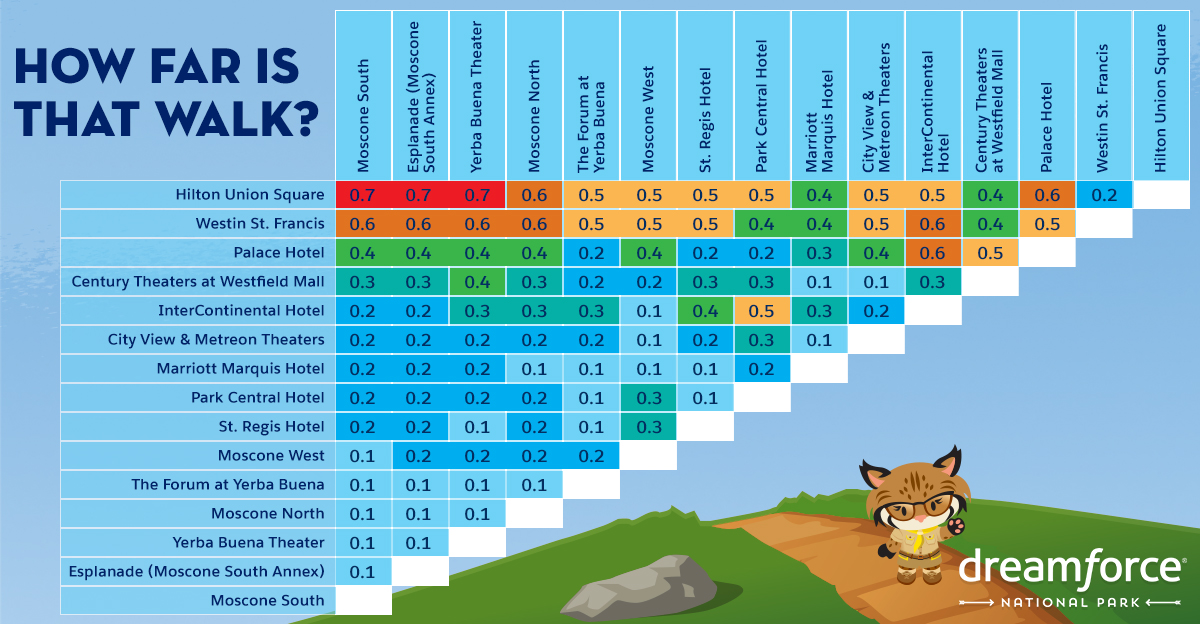 In addition to the above, Agenda Builder is now equipped with a new “distance features”. In Agenda Builder, the travel time is highlighted between your current and next session. Directions will note the travel time between the session you're looking to go to and any previous enrolled session. A banner alert will appear on your enrollment action if there's a tight connection.

BART is a system built to act as a regional commuter train. It provides quick access between the San Francisco and Oakland International Airports and the downtown hubs of San Francisco, Oakland, and Berkeley.

Caltrain runs from San Francisco to San Jose connecting Silicon Valley and Stanford. It provides easy access to the San Jose Airport and creates an express route between San Jose and San Francisco.

Muni is the name for San Francisco’s network of buses, cable cars, and light rail trains. Muni Rail helps pick up where the BART leaves off, helping riders’ access destinations west of the city toward the coast and will get you to AT&T Park, Fisherman’s Wharf, and move riders along the bayfront piers via its streetcar F line. Muni Buses help connect visitors with Presidio, The Golden Gate Bridge, and Lombard Street.

We have shuttles running to and from any of our 100+ official hotels. All official Dreamforce attendee hotels will have complimentary shuttle service directly to the Moscone convention center. If you're staying at one of our official hotels, check the Dreamforce Shuttle sign in your lobby for specific route information (see below). 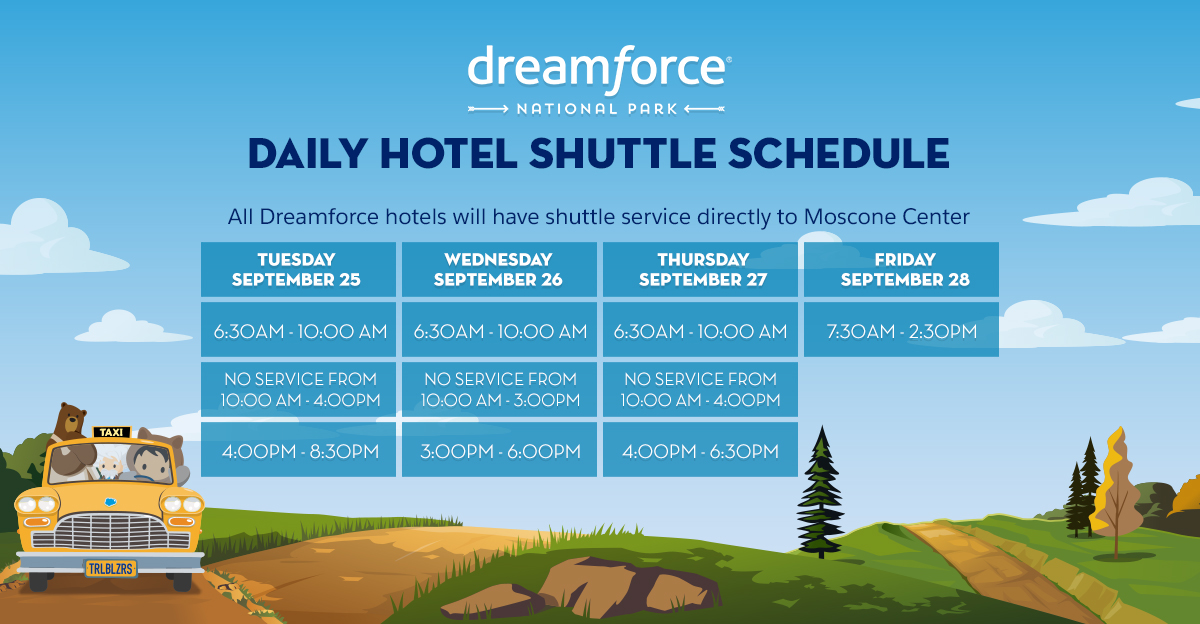 To make sure you're always prepared, please kind in mind the following tips:

Campus Shuttles will run between Moscone West, Hilton San Francisco Union Square, and the Palace Hotel during the following times: 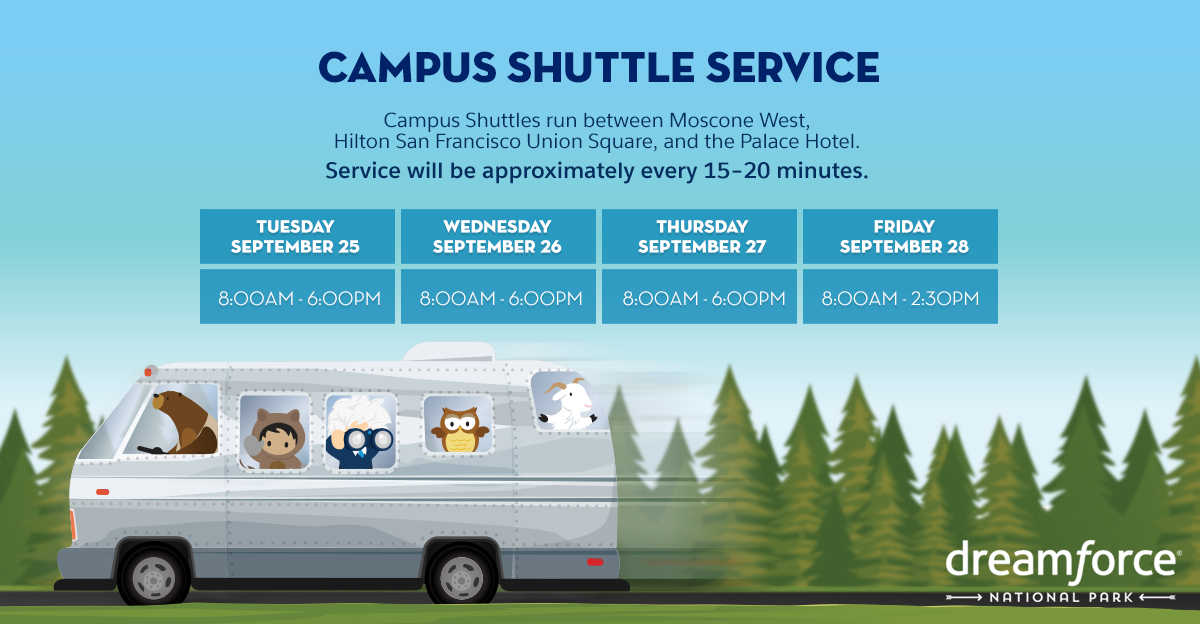 To pick up a campus shuttle, go to any of the stops/boarding locations below:

Rideshares are another way to get around in San Francisco. However, with all of the congestion and fun that Dreamforce brings, we don't encourage hopping in an Uber or Lyft, as there are other options available. To ease some of the congestion, there are designated rideshare pickup locations.

Uber and Lyft rideshares can be picked up and dropped off at Howard and 4th Streets and at Jessie Square.

Dreamfest Uber and Lyft rideshare location are on Hyde Street, between Grove Street and McAllister Street. 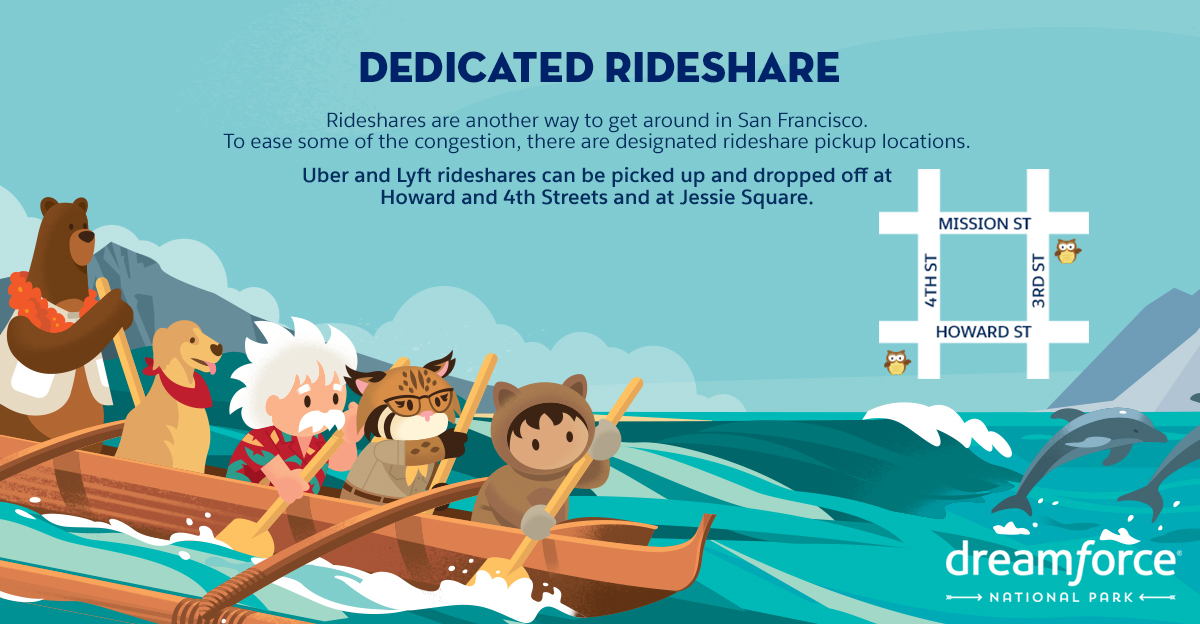 Need a quick lift? Don't forget that you can still flag down a taxi on the streets of San Francisco.

Jump into an open-air pedicab and take in the Dreamforce madness while getting to where you need to go. While pedicabs, also known as a "bicycle rickshaws," are not normally seen in downtown San Francisco, Dreamforce pedicabs will be easy to spot with event signage. Pick up a Dreamforce pedicab outside Moscone West, on Howard Street between 4th and 5th Streets.

Bike Valet is complimentary and is located in the Moscone South Paseo, the paved walkway behind Moscone South, accessible via 3rd Street near Howard Street.

There are plenty of ways to get around at Dreamforce! Take your time and enjoy the ride. And for more tips on getting around the Dreamforce campus and making the most of your time in San Francisco, check out our blog post, "6 Tips for Navigating the Dreamforce '18 Campus."