Dr. Kai-Fu Lee on Why AI Redefines What It Means to Be Human

in Artificial Intelligence, Thought Leadership, IT The maturing of artificial intelligence (AI) represents a milestone in relations between humans and machines. Software systems that self-learn, drawing on complex algorithms and massive computational power, have the potential to disrupt whole industries, create new business models, and fundamentally change how people live and work. 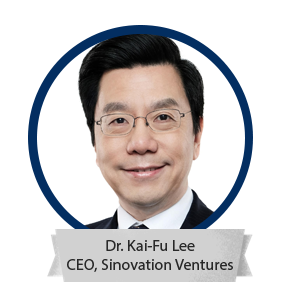 Dr. Kai-Fu Lee has been at the center of the AI revolution for more than 30 years. For his Ph.D. thesis at Carnegie Mellon University, Dr. Lee developed the world’s first speaker-independent, continuous speech recognition system. He was hired by Apple in 1990 before subsequently joining Silicon Graphics and then Microsoft, where he helped establish Microsoft Research’s laboratory in Beijing. Dr. Lee then served as the founding President of Google China.

Today, he is Chairman and Chief Executive Officer of Sinovation Ventures, as well as President of its Artificial Intelligence Institute. The company, which manages a US$2 billion dual currency investment fund, is a leading technology-savvy investment firm focused on developing the next generation of Chinese high-tech leaders.

Dr. Lee was named one of the 100 most influential people in the world by Time Magazine in 2013. He has authored 10 U.S. patents, more than 100 journal and conference papers, and seven top-selling books in Chinese.

Fresh from publishing his latest book, AI Superpowers: China, Silicon Valley, and the New World Order, Dr. Lee spoke to me recently to share some fascinating advice for businesses as they consider embracing AI capabilities. Dr. Lee will also be speaking in Dreamforce this year, in conversation with Dr. Richard Socher, on how AI will drive business transformation.

Q: As AI replaces jobs involving more routine tasks, you’ve recommended transitioning people into jobs that AI can’t replace: roles that require compassion and love — such as nurses, teachers, and social workers. You’ve even said love is what differentiates us from AI. How do we engage with AI from a position of love?

AI is giving our society a wake-up call. Currently, so much of our time is spent on busywork and repetitive work. That will largely be automated in the age of AI, so we can devote more of our professional and personal time to caring for other people. AI has the capability to basically eliminate those activities that we weren’t meant to do as humans but got trapped into, dating back to the first Industrial Revolution.

Q: Will tomorrow’s employers value human qualities like compassion and empathy more than they do today?

Humans can’t just be substituted by machines or data. I believe that creativity is something that cannot be replaced. Storytelling in fields such as public relations is an area that I think will flourish. Empathy is also important, particularly in human resources departments as employees deal with the angst brought about by change.

Overall, organizations in a world of AI will require people to excel at connecting with others and gaining people’s trust. Many transactions are already occurring online, but high-end corporate sales will require the ability to build long-term customer relationships. My advice to employees would be to become lifelong learners, always looking for the next skill and never believing that the next 10 years will be like the previous decade.

Q: In your book, you discuss the distinction between AI being used in trivial versus big ways. What are the big opportunities we may miss if we just focus on relatively incremental gains, like being able to make a haircutting appointment more simply?

AI is about more than replacing each worker with a robot. It will involve the disruption and reshaping of whole industries. Autonomous vehicles, public transport, and logistics will be huge areas. There is also the opportunity to disrupt insurance, creating a system that is more efficient, fair, and transparent. Retail is another area I mention in my book that is undergoing a revolution as stores tailor their offerings based on customer data. The online retailers have a big advantage here because they learn so much from how people browse their websites. But in the future, physical stores will deploy technologies such as sensors that allow them to gain a pretty strong profile of shoppers who come inside.

Q: How do you see business models evolving as a result?

I believe that business models will evolve to be quite transparent. In a world of AI, consumers will have high access to information, perhaps using their digital assistant to find the best price or analyze which product has received the best reviews. Therefore, it’s no longer possible to use information asymmetry to charge people a disproportionate amount. If more people can use big data to obtain cost savings or a better margin, then competition will drive down prices and increase transparencies. Take Uber — when they became more dominant, they raised prices; then Lyft came in. There is a system of checks and balances that’s there for many types of business. Having said that, AI has the potential to enhance monopolistic power in other industries. So, I think future economists will be studying how these two effects counterbalance each other.

Q: You alluded there to voice-enabled personal assistants like Siri and Alexa. We, like you, think this is going to be a very important domain of AI. How will the experience of customers change as a result of interacting with these services?

Imagine if a computer system could understand our personal attributes, remember everything we said and did, and use that information to recollect everything in our lives. It can also understand what we want, so we merely tell the "intelligent assistant" our goal, and the assistant would figure out the steps to get to our goal. This would remove the friction out of everyday living. We are on the cusp of this technology, and it’s an exciting time. Of course, keeping our personal private data secure will be more important than ever.

Q: Given the extraordinary pace of innovation, how does government regulate AI, and what should that effort look like?

Governments have proven slow to regulate new technology. On this very complicated issue, it will be challenging. It’s probably more practical to focus on things that actually can be regulated — such as ownership of data — and related violations, which are easily understood rather than abstract and have to be argued in court. It’s also wise to regulate AI by industry, such as transportation or manufacturing, as opposed to regulating it more generally, because that seems a little bit broad. There are some commendable initiatives, such as the Partnership on AI, that are designed to create best practices. However, these are not so easy to turn into laws.

Q: AI obviously raises important issues of privacy. How are attitudes to capturing data in China different to those in the U.S. or Europe?

Views about privacy are deeply embedded culturally. In China, there’s pretty strong enforcement of laws against those who sell users’ private data. The punishments are probably stronger even than in the U.S. or Europe. At the same time, Chinese users tend to be more willing to trade some degree of privacy for security or convenience. That’s fine as long as it’s done with disclosure; advocacy groups are free to point out dangerous practices, and if corporations behave badly, there are ways to go after them. AI has the potential to develop more quickly, not just because of the enormous size of data in China, but there is more flexibility with the use of personal data, as long as the data is protected.

Of course, all industries affected by technology face so many challenges related to security and privacy. There are many ways for companies to share best practices, make AI safe for users, and together ensure that AI benefits the entire world.

Q: Does AI increase inequality? What can we do to avoid that?

I talk in my book about the great divide between the top 1% and the bottom 50% of the population. There are areas where AI has the potential to be an equalizer — for example, reducing the cost of healthcare or lowering the barrier to accessing a good education.

However, the digital divide that has been enhanced and exacerbated by the advent of computers, the internet, and mobile devices could also get worse with AI. Various ideas are being advanced in relation to the redistribution of wealth, and I think that some government policy response will end up being necessary.

As I mention in my book, I have many concerns about the concept of universal basic income. But some form of redistribution is going to be inevitable. Otherwise, this large divide isn’t a formula for stability, happiness, or harmony.

Dr. Kai-Fu Lee will be speaking at Dreamforce, September 25–28, in conversation with Dr. Richard Socher, on how AI will drive business transformation. To find out more about Dreamforce 2018, visit the Dreamforce homepage.

Challenges With Data? You’re Not Alone
By Jennifer Sacks