Sometimes a message, campaign, or product takes on a life of its own and becomes a legitimate movement.

Think about Dove’s Real Beauty campaign (as shown in the image above), TOMS Shoes, or American Express with Small Business Saturday. These messages went beyond marketing to become conversation starters and true movements with engaged followings. They seemed to spread like magic, but what really happened?

We asked two movement-makers for their behind-the-scenes stories for the latest episode of the Marketing Cloudcast, the marketing podcast from Salesforce.

In the full episode, Jay Baer explains what fueled the crazy success of his NYT-bestselling book Youtility, and Sangram Vajre, CMO and co-founder of Terminus, shares how his “Flip My Funnel” concept grew a dedicated community of worldwide B2B followers.

You’ll hear the back story that’s rarely told of how these movements grew — as well as Jay and Sangram’s cautionary advice about what doesn’t really constitute a movement.

So can you create a movement? Here are a few tips from Jay and Sangram to find out. For the full conversation that’s filled with many more insights, subscribe on Apple Podcasts, Google Play Music, Stitcher, or wherever you listen to podcasts.

Do you have a vocal community of participants?

Jay explains: “I defy you to come up with a movement that isn’t essentially propelled by the participants of the movement. Every movement is driven almost entirely by word of mouth, that’s what makes it a movement. You can’t media buy you way into a movement. It just doesn’t work, it’s just not possible. Because if you have to pay for the attention it’s not good enough to become a movement.

Every true movement is really based on having massive relevancy, the right timing, and a group of early adopters who believe in it so much they’re willing to put their own social capital on the line to bring in the second, third, fourth, and fifth levels of participants in that same movement.”

Are you willing to stop talking about your brand and products?

Sangram says with Flip My Funnel, his team and all events focused on the core message and concept without mentioning the company behind it at all. In fact, Terminus invites its competitors to be part of the conversation. Sangram explains, “[Flip My Funnel] didn’t talk about the product. It didn’t talk about buy me or buy from me. What is portrayed is that I want to be a part of this. I want to challenge something and I want to be a part of this movement that will help people be better at whatever it is that they do.”

“If you truly, truly believe in the problem you’re solving and you’re willing to talk about it without giving your company any credit, you have the opportunity to build a movement.” 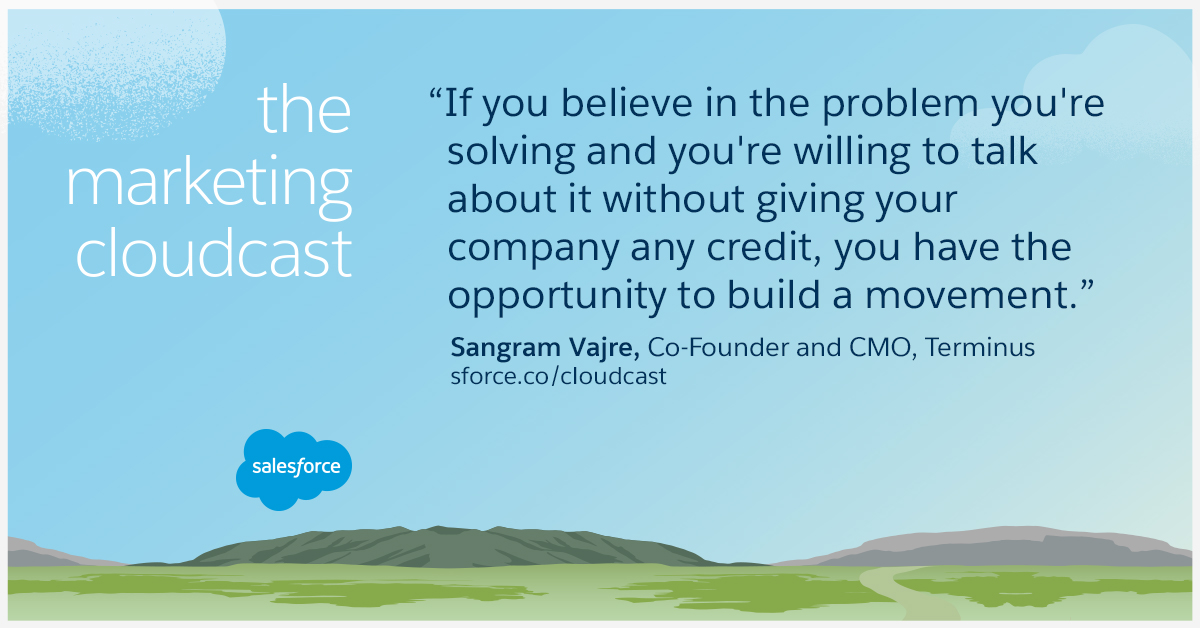 Does your product, campaign, or message deserve a movement?

Are you really seeking to build a movement or just an XL marketing campaign? Jay advises, “Funny enough, this concept of can you make your own movement is sort of a bigger way to say, ‘Hey, how much would I have to pay you to make this video go viral?‘ It’s the same question. The answer is all the money and none of the money. Nobody can do that for you. Things go viral when they deserve to be viral. And things become movements when they deserve to be movements.”

Are your goals industry-wide or company-wide?

Sangram says he never realized their “movement” was actually a reality until recently: “Maybe six months ago somebody said, ‘You guys actually have a movement.’ We just didn’t comprehend it. We knew we would find a lot of peace if the FlipMyFunnel model became the way people talked about B2B marketing and sales, with no attribution to Terminus. It doesn’t really matter.”

Hear more about Sangram’s success with Flip My Funnel on the full episode of the Cloudcast — and you’ll also hear about how Jay Baer’s dentist rocks a content marketing strategy with video.

Two weeks ago, we shifted the Marketing Cloudcast to an entirely new format and style (think narrative with multiple guests — more Freakonomics, less live interview), and I’d love to know what you think!

Join the thousands of smart marketers who are Cloducast subscribers on Apple Podcasts, Overcast, Google Play Music, and Stitcher.

Tweet @youngheike with feedback on this episode — or ideas for future guests and topics.