How Does Blockchain Technology Work?

Get our bi-weekly newsletter for the latest business insights.

While blockchain hit the mainstream and became a buzzword with bitcoin and other forms of cryptocurrency, its potential extends much further. By allowing digital information to be distributed and not copied, blockchain technology is gaining attention for its potential use in many industries.

What Is Blockchain Technology?

At its most basic, a blockchain is a time-stamped series of immutable data records that are managed by computers not owned by any single entity. Each block is secured and bound to the other using cryptographic principles, or the chain.

The blockchain network is not governed by a central authority. The ledger is shared, unchangeable and open for all to see, increasing transparency and accountability.

Blocks are composed of digital information, including:

The three pillars of blockchain are:

Before bitcoin, we were accustomed to centralised services, in which a centralised entity stores all the data, and you interact with that entity to get the information you need. Banks are an example of a centralised system. They hold your money, and the only way you can access it is through the banking services.

Centralised services have many advantages, but they also have vulnerabilities:

Decentralised blockchain systems combat this by distributing information across the network. Everyone within the network owns the information and can access it without the need for a third party.

This level of transparency has never existed within a financial system and adds a considerable level of accountability. The movements of large institutions are a matter of public record within the network, forcing them to be honest about their transactions.

In the blockchain context, immutability means that once something is entered into the blockchain, no one can tamper with it. This is done using the cryptographic hash function.

In simple terms, hashing means taking an input string of any length and providing an output of a fixed length. This is critical when dealing with a large amount of data and transactions. Instead of remembering input data of indefinite lengths, the hash is available to keep track.

With Salesforce Blockchain you can create a secure network for quickly and reliably sharing data. 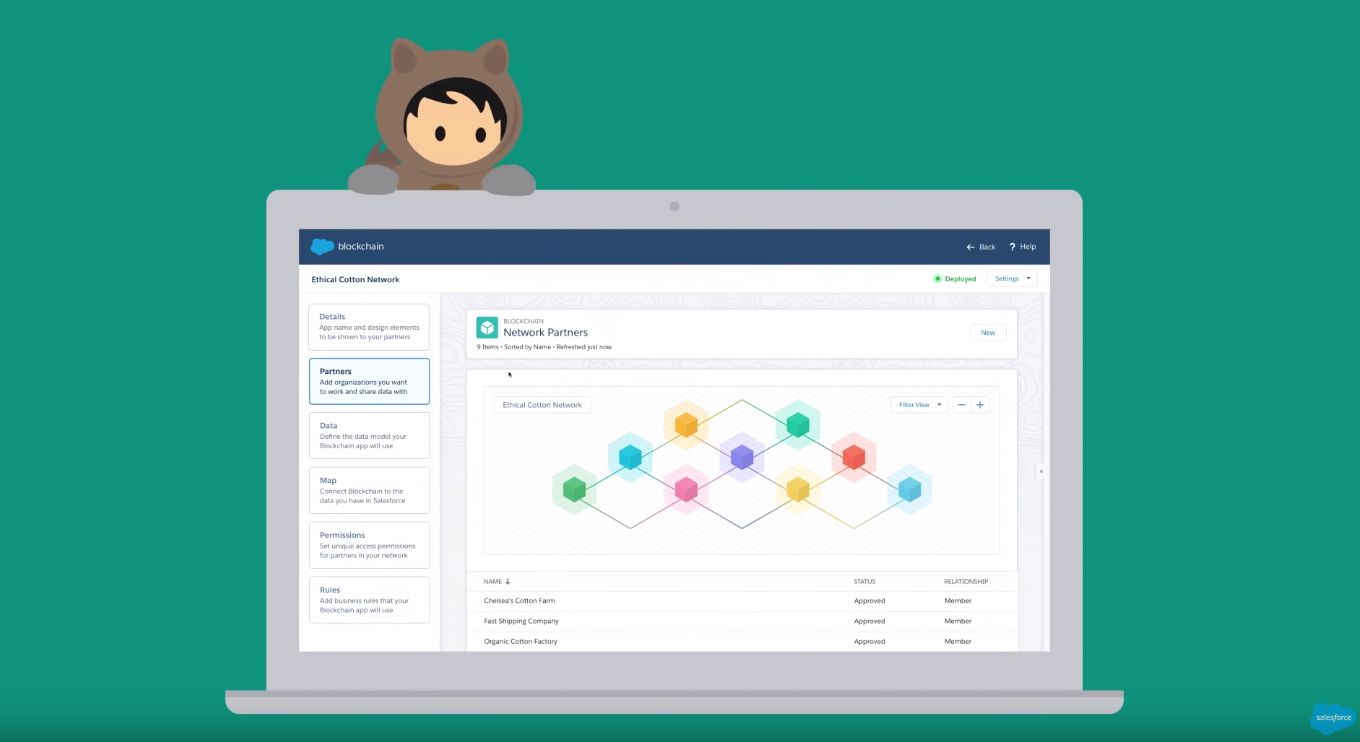 When new data is stored in the block, it is added to the blockchain. For a block to be added to the chain, the following has to happen:

When the block is added to the blockchain, it becomes visible to any user within the network.

Blockchain technology's greatest strength is the security it offers. Blocks are always stored chronologically and linearly, with each new block added to the end of the existing chain. Once a new block is added, it's difficult to alter the contents of the block without affecting the entire blockchain.

This is a significant security advantage. If a hacker were to attempt to manipulate or alter the transaction, the block's hash will change. The next block in the chain still has the previous hash, so the hacker needs to update that too, and so on.

Computers also must provide ‘proof of work’ to enter a blockchain network. This involves solving a complex computational problem. If the computer can solve it, it's eligible to add a block to the blockchain. The odds against solving one of these problems are staggering, so computers must run programs that require a significant amount of power and money to solve them successfully.

This simple system frustrates the efforts of hackers. If a hacker wanted to coordinate a blockchain attack, they would need their computers to solve the complex problem against the same odds as every other computer. The cost and effort involved would probably outweigh any benefits of hacking the blockchain.

Learn more on Trust.salesforce.com, the Salesforce community's home for real-time information on system performance and security.

The finance industry is the most obvious application for blockchain technology. By integrating blockchain into banking, transactions can be processed in minutes, rather than days, regardless of whether they occur during normal business hours.

The privacy of blockchain makes it appealing for healthcare providers. These providers can securely store their patients' medical records within the blockchain, which provides patients with the confidence that the records can't be altered. Personal health records can also be encoded and stored with a private access key, so that they're only accessible to authorised users.

The process of recording property rights is inefficient and laborious. A physical deed needs to be delivered to the recording office and manually entered into the database and public index. If there's a dispute, the claims to the property need to be reconciled with the public index.

This process is not only time-consuming; it's also vulnerable to human error. Blockchain can eliminate the need to search for physical files and scan documents locally, and property owners can be confident that their deed is permanent and accurate.

Blockchain can prove invaluable for supply-chain management by recording the origins of goods that have been purchased. This allows companies to verify the authenticity of goods, for example those labelled as ‘Fair Trade’.

In the food industry, this system is useful for tracking the path and safety of food throughout the farm-to-consumer journey.

Blockchain has the potential to reduce or eliminate voter or election fraud, which can indirectly bolster voter turnout. If each vote is stored as a block in the blockchain, it's virtually impossible to tamper with. Blockchain technology also preserves transparency, reduces the need for staff to monitor elections, and provides instant results.

Advanced customer relationship management (CRM) systems are a mainstay in many organisations, but customers are increasingly wary of sharing sensitive data. On top of that, consumer demand is unpredictable and fleeting, with endless choices across different industries.

However, coupled with analytics, blockchain technology can address these changing demands. Blockchain can assist CRMs in receiving and protecting the sensitive data of customers by transferring verified documents and activity logs through secure cryptography that eliminates the intermediary.

This also helps organisations to interpret the pathway and flow of goods and services between businesses in order to better understand customer demand from different markets. Organisations can then allocate resources to specific markets, creating improved customer experiences with fewer resources.

Pros and Cons of Blockchain

Blockchain shows huge potential for many different industries, but it's not without drawbacks. Here are the advantages and disadvantages of blockchain technology:

Looking to the Future of Blockchain

Since its humble beginnings as a research project in 1991, blockchain has evolved and grown to become a promising technology for an array of industries. With many practical applications for the technology already being implemented and explored, blockchain is poised to revolutionise business and government in the future.

8 Sales Tools and Tactics That Are Changing the Game

Discover
8 Sales Tools and Tactics That Are Changing the Game
The Future of Work Is Here: Begin Upskilling and Reskilling Employees Today

Discover
The Future of Work Is Here: Begin Upskilling and Reskilling Employees Today